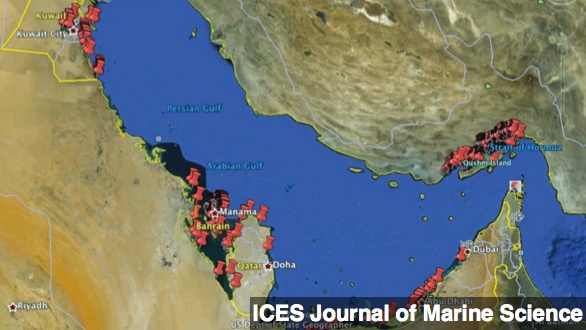 By Evan Thomas
November 27, 2013
Researchers used satellite imagery to compile estimates of fishing in the Persian Gulf — and found the take could be five times the reported amount.
SHOW TRANSCRIPT

Overfishing is a problem big enough to see from space.

Researchers used imagery compiled from Google Earth to locate an estimated 1,900 fishing structures scattered across the Persian Gulf, which they say are skewing reported fishing totals. (Via Science Daily)

See that? It's a fish trap called a weir, which takes advantage of the motions of the tide to catch a wide range of marine creatures.

In the first study of its kind, scientists counted all the weirs they could find based on 2005 satellite imagery from the Persian Gulf to determine the impact they had on fishing totals.

These weirs caught an estimated 34,170 tons of fish — five times the 5,800 tons the countries in the region reported at the time. (Via PBS)

The presence of such unreported weirs makes it difficult for scientists to get an accurate idea of how much fishing humans do.

As one of the study's authors told Quartz: "Underreporting fish catches can jeopardize a country’s food security, economy, not to mention impact entire marine ecosystems.This is particularly important in the case of the Persian Gulf, where fisheries are the second most important natural resource after oil." (Via Quartz)

So while finding these weirs isn't necessarily good news, it is important news. Study co-author Daniel Pauly says satellite imaging can provide a new way to enforce the management of marine resources.

"Because countries don't provide reliable information on their fisheries' catches, we need to expand our thinking and look at other sources of information and new technologies to tell us about what's happening in our oceans." (Via LiveScience)

The study was published in the ICES Journal of Marine Science.