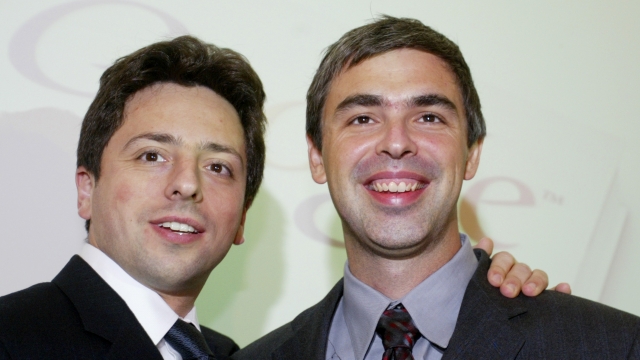 SMS
Google Co-Founders Step Down From CEO And President Roles At Alphabet
By LeeAnne Lowry
By LeeAnne Lowry
December 4, 2019
Larry Page and Sergey Brin said they're stepping down because "Alphabet and Google no longer need two CEOs and a President."
SHOW TRANSCRIPT

Google co-founders Larry Page and Sergey Brin announced Tuesday they're stepping away from their respective roles as CEO and president of the tech firm's parent company, Alphabet.

Page and Brin co-founded Google in a Menlo Park, California, garage more than two decades ago. They formed Alphabet in 2015 as a way to keep Google structurally separate from other ventures — such as its driverless car project Waymo, drone company Wing and research organization Verily.

Sundar Pichai — Google's CEO — will step into Alphabet's CEO position. He's been leading Google since 2015 and will stay in that role as he also takes on responsibilities at the parent company.

Page and Brin will stay on as shareholders and board members. They said they're leaving because "Alphabet and Google no longer need two CEOs and a President."

The departing leaders explained in a blog post, "We've never been ones to hold on to management roles when we think there's a better way to run the company."