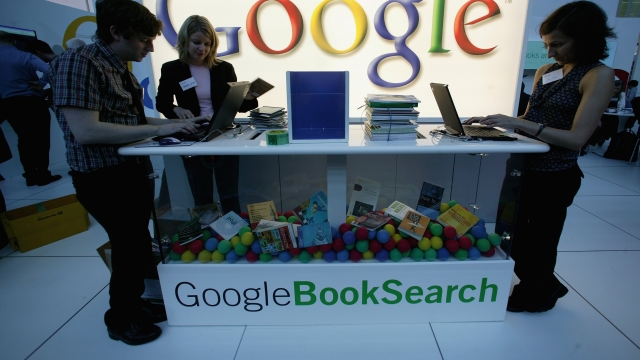 SMS
Google Books' Legal Beef Might Actually Be Over
By Samantha Crook
By Samantha Crook
April 18, 2016
Google was sued by the Authors Guild in 2005. Yep, this thing has been going on for over a decade.
SHOW TRANSCRIPT

On Monday, the Supreme Court refused to review the ongoing Google Books case — which means the painfully lengthy legal battle may be over for real this time.

Google was sued by the Authors Guild for copyright infringement over its mission to scan millions of books to create a searchable database. That was in 2005. That's right, this thing has been going on for over a decade.

"The concern by critics is that this case could be precedent setting ... that would set the rules of the road for how you access a book online, how you read a book online be it on your mobile phone or whatever in the future," a reporter told C-SPAN.

In 2015, a lower court ruled that scanning and providing portions of copyrighted books online didn't violate fair use because it was "highly transformative" and didn't substitute the actual book.

"What the doctrine of fair use is intended to do in copyright law to sort of serve as a backstop against over aggressive copyright enforcement," Evan Brown told LXBN.

"I first started working on Google Books because of my interest in helping to make the contents of research libraries available anywhere in the world with an internet connection, from dorm rooms to schoolhouses that wouldn't otherwise have access to these materials," a representative from the company said in a Google video.

Even for some in support of the company's efforts to make information more accessible, there are still reservations about the company potentially exploiting that information in a way that wouldn't benefit the public.