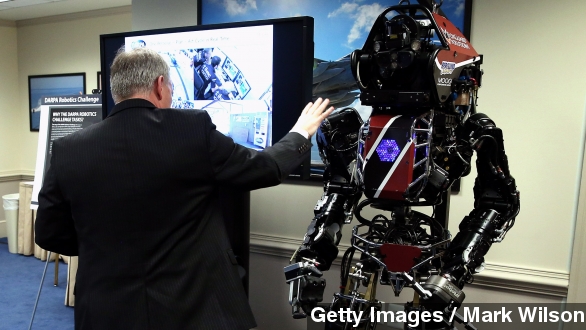 With headlines like these, how could you not be excited to see the skills of one of Google's latest robotic endeavors?

Ok, now we're really pumped! So without further adieu, time to get out your headbands and Cobra Kai shirt and prepare to have your mind blown! — or leg swept, or whatever. Roll it.

But, in all fairness, it's easy to see why all the hoopla. The "crane kick" employed by Ralph Macchio's character in the 1984 cult film "The Karate Kid" has kind of served as the be-all, end-all martial arts finishing move — on a fictional level, of course.

So to see the six-foot-two, 330-pound Terminator-esque figure emulate even a small portion of Daniel-san's famous signature move in a non-fictional setting is both a little exciting and a little scary to say the least.

And it's getting a lot of attention around the web. A writer for U-T San Diego jokes that robots may become a new fad. "Vampires had their time in the sun, and zombies are eating everyone's attention right now, but robots may be the real pop culture deal pretty soon."

Google-owned robotics lab Boston Dynamics created the Atlas robot. They're the same tech minds behind a number of robotic machines such as: Petman, BigDog, WildCat and Cheetah.

And The New York Times says the tech giant continues to expand that division. In fact, Boston Dynamics is the "eighth robotics company that Google has acquired in the last half-year" — with more far-reaching implications than just a karate kick.

"[It's the] clearest indication yet that Google is intent on building a new class of autonomous systems that might do anything from warehouse work to package delivery and even elder care."