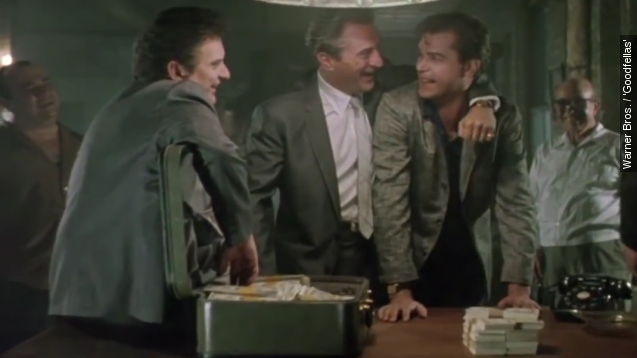 SMS
'Goodfellas' Plane Heist Suspect Acquitted On All Charges
By Grant Suneson
By Grant Suneson
November 12, 2015
Vincent Asaro, an alleged mobster, was acquitted on all charges stemming from the 1978 heist of a Lufthansa plane portrayed in the movie "Goodfellas."
SHOW TRANSCRIPT

"Nobody knows for sure just how much was taken in a daring predawn raid at the Lufthansa cargo terminal at Kennedy airport," a radio announcer said in a scene from "Goodfellas."

An alleged mobster was found not guilty on all charges of assisting in the famous 1978 Lufthansa heist of close to $6 million in cash and jewels that was portrayed in the classic Mafia movie “Goodfellas.”

Eighty-year-old Vincent Asaro, who prosecutors claimed was a captain in the Bonanno crime family, was acquitted Thursday on one count of racketeering and two counts related to extortion.

Even though the heist was nearly 40 years ago, prosecutors said Asaro was still active in the Mafia. When he was indicted in January last year, the FBI issued a statement saying, "Neither age nor time dimmed Asaro’s ruthless ways, as he continued to order violence to carry out mob business in recent months."

Much like in the film, many of the people thought to be involved in the theft were killed, but some of those who survived testified against Asaro in the trial that included more than 70 witnesses.

But the prosecution's case largely hinged on Asaro’s cousin, Gaspare Valenti, who told the FBI Asaro was involved in the Lufthansa heist. Valenti recorded conversations with him that prosecutors said tied him to the crime, with Asaro saying, "We never got our right money, what we were supposed to get."

But Asaro's defense team was able to successfully argue that some of the witnesses, many of whom had ties to organized crime themselves, were untrustworthy.