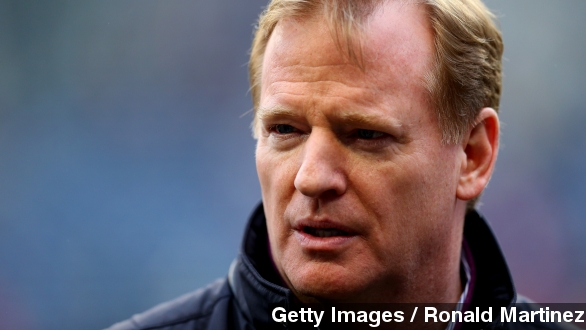 By Zach Toombs
September 9, 2014
Breaking his silence on the Ray Rice domestic abuse outrage, NFL Commissioner Roger Goodell said the NFL failed to get access to the video.
SHOW TRANSCRIPT

NFL Commissioner Roger Goodell is on damage control, sitting Tuesday for an exclusive interview with CBS to back up his previous claim: that league officials never saw video of Ray Rice's assault on his then-fiancé.

It was TMZ's release of a video taken inside an Atlantic City elevator that prompted Rice's firing from the Baltimore Ravens and suspension from the NFL. But Goodell's claim directly contradicts a TMZ report that "the NFL saw the elevator footage before imposing (an earlier) 2-game suspension."

CBS released only part of Goodell's interview Tuesday evening, with the rest scheduled to air Wednesday on CBS This Morning. Now, one big question here is how TMZ was able to get its hands on the video when the NFL didn't — if it truly didn't.

Monday, the NFL released a statement saying the video was not made available to the league. And Ravens Head Coach John Harbaugh has said this:

RAVENS HEAD COACH JOHN HARBAUGH VIA COMCAST SPORTSNET: "It was something we saw for the first time today, all of us. It changed things, of course. It made things a little bit different." ​

Goodell and the NFL in general have taken a lot of criticism for their handling of the Ray Rice case. Critics say the league has proven incompetent at best and downright corrupt at worst.

And some of them say Goodell should lose his job.

KEITH OLBERMANN, ON ESPN: "Mr. Goodell is an enabler of men who beat women. His position within the National Football League is no longer tenable."

CBS' Norah O'Donnell interviewed Goodell. She says the commissioner will comment directly on whether he thinks his job is on the line when the full interview airs Wednesday on CBS This Morning.