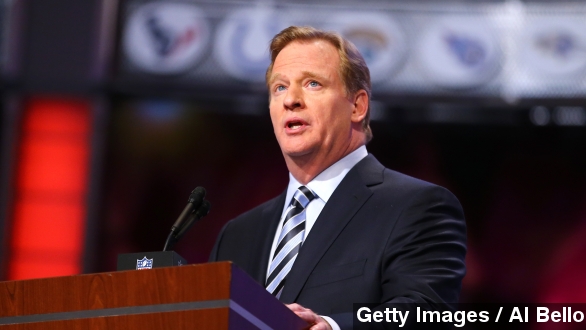 The latest in the saga of former Baltimore Ravens running back Ray Rice and the NFL's handling of the now-infamous elevator video.

ABC: "More trouble for the NFL this morning. The league announcing former FBI director Robert Mueller will lead an independent investigation into what happened."

NFL Commissioner Roger Goodell announced the new investigation Wednesday, just hours after reports surfaced that a law enforcement official had sent a video of Rice punching his then-fiancee in an Atlantic City elevator to the NFL months before the footage surfaced on TMZ Monday. (Video via ESPN)

According to a statement released by the NFL late Wednesday night, the probe will be overseen by two owners, John Mara of the New York Giants and Dan Rooney of the Pittsburgh Steelers. Goodell promised Mueller the full cooperation of the league and access to all its records and said the final report will be made public.

Both owners involved in the investigation are lawyers.

It's worth noting Mara released a statement Wednesday saying the league did the right thing by not going around law enforcement to get the Rice video.

And Mueller works for WilmerHale, which has represented the NFL in its Sunday Ticket deal with DirecTV.

But news of Mueller's investigation probably won't quiet calls for Goodell to resign from his position.

Earlier on Wednesday, Goodell sent a letter to team owners and presidents stressing that the league had not seen the violent video of Rice and Janay Palmer, who is now his wife, until it was made public Monday.

After the footage went viral, Goodell suspended Rice from the NFL indefinitely, and the Baltimore Ravens terminated his contract.

But the Associated Press reported Wednesday the footage had been sent to an NFL executive back in April. The outlet also obtained audio it says is confirmation that someone in the NFL's offices in New York had received the video on April 9.

An NFL spokesperson reiterated again in a statement Wednesday night the league was unaware of anyone in its office who saw or possessed the video before it was made public. But critics aren't buying it.

USA Today's Jarrett Bell put it this way: "Each time the NFL repeats its position, it's another blow to the credibility of how business is conducted at NFL headquarters under Goodell's watch. And it increases the heat on this commissioner like never before."

And many are now calling for him to step down as commissioner, including the president of the National Organization for Women.

NOW PRESIDENT TERRY O'NEILL TO FOX SPORTS: "Roger Goodell has a huge problem on his hands, and he is not the person who can now credibly lead change. The NFL needs deep-rooted change, and Roger Goodell is a huge part of the problem."

Others think he should be removed from his post. ESPN host Keith Olbermann called on the NFL team owners to "publicly and loudly" fire him.

But according to several reports, Goodell remains adamant he won't resign and isn't even considering the possibility.

As for the new Ray Rice investigation, there's no word on how long it will take or when Mueller expects to release a final report.