Good Samaritans Leaving Scarves For Needy Around The Nation 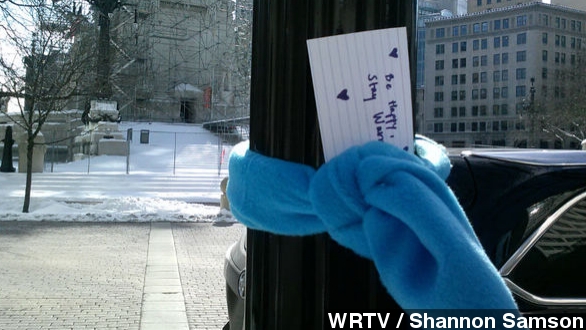 SMS
Good Samaritans Leaving Scarves For Needy Around The Nation
By Matt Moreno
By Matt Moreno
February 25, 2015
The scarves are being placed around the country by several organizations to help keep people warm.
SHOW TRANSCRIPT

If you see a scarf wrapped around a tree nearby, here's one possible explanation.

"Someone wrapped scarves around several busts of baseball players at 'Chickasaw Bricktown Ballpark' and left notes telling visitors the scarves are meant for anyone in need," KJRH reports.

It's called scarf bombing, similar to yarn bombing and it's basically placing scarves or other knitted clothing around the city. Most have cards saying that the scarves aren't trash, but instead donations for those who need them.

There are reports from all around the nation including these from Oklahoma City to Jacksonville to Fort Wayne and even in Ottawa, Canada.

There is even a Facebook event for one in Arkansas.

It's not exactly clear when the whole practice got started, but some sites suggest the scarves first started popping up in 2010.

MassLive.com spoke with one woman who was inspired when the scarves started appearing in Worcester, Mass. — an area that's seen a record 90 inches of snow already this winter season. (Video via WFXT)

She said, "I know a lot of homeless teens and marginalized youth hang around down there ... I don't know who was behind this one, but I'm delighted to see someone doing it."

Gloves, hats, and other warm items are also welcome.

This video includes images from WRTV.