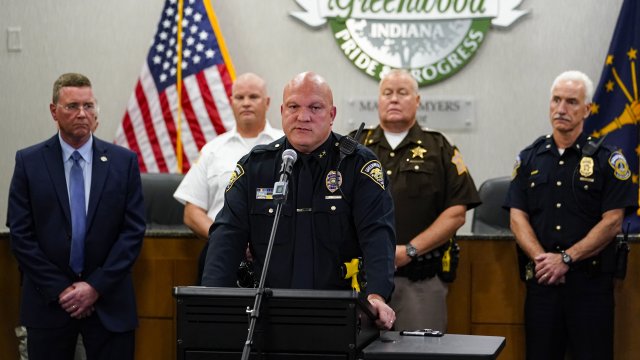 A gunman killed three people and injured two on Sunday evening in the food court of an Indiana mall before being fatally shot by an armed bystander.

"His actions were nothing short of heroic. He engaged the gunman from quite a distance with a handgun, was very proficient in that, very tactically sound. And as he moved to close in on the suspect, he was also motioning for people to exit behind him," Police Chief James Ison of Greenwood said.

Police identified the dead gunman as 20-year-old Jonathan Sapirman. He had two rifles, a glock semi-automatic pistol, multiple magazines and over 100 rounds of ammunition on him, according to Greenwood Police.

Authorities say he began firing with a long rifle after hiding in a mall bathroom for over an hour.

Minutes into the rampage, he was shot by a 22-year-old man who was armed and just happened to be shopping with his girlfriend.

Law enforcement officials say the shooter appears to have acted alone, and his motive for the attack is still unclear.

"He has a juvenile record and no criminal history as an adult. His past incidents with the Greenwood Police Department include minor offenses as a juvenile, such as a fight at school and being a juvenile runaway," Ison said.

On Monday, authorities identified the three victims, adding that the two people injured were in stable condition.

"Pedro Piñeda. Age 56 of Indianapolis, and we are handling that investigation. Next individual, Rosa Marian Rivera De Piñata. Age 37. She is the wife of Pedro, so they are a married couple. That investigation is being handled by the Marin County Coroner's office. And the last individual is Victor Gomez, age 30, of Indianapolis," said Michael Pruitt, the coroner for Johnson County.

They say people ran for safety into nearby stores that provided shelter.

“I was just standing at the gate ready to close for the day and I heard like 30 gunshots. And I just saw people running towards the store and I was just letting in as many people as I could before I shut the gate," a bystander said.

"I just remember walking through the mall there were shards, carts, strollers. Literally anything you could imagine was on the floor just because, you know, just people dropped and ran," Madison Shaffer, a mall employee, said.

The mass shooting in Greenwood, Indiana, just south of Indianapolis, is one of the latest to unnerve Americans this year.

Schools, grocery stores, churches, a Fourth of July parade and now the Greenwood Park mall, all turning into killing grounds in recent months.