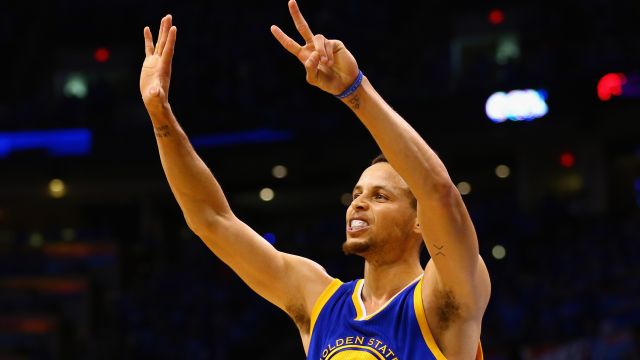 The Golden State Warriors are looking to become the 10th team in NBA history to comeback from a 3-1 series deficit.

After Game 4 and down 3-1 in the series, Steph Curry said the Golden State Warriors weren't going out this way. And he wasn't joking.

The NBA's best team has roared back in the Western Conference Finals against Oklahoma City, defeating the Thunder 108-101 on Saturday night.

This time around, Warriors guard Klay Thompson's star shined the brightest. Thompson poured in 11 3-pointers, an NBA playoff record. He finished the night with 41 points.

"You're playing uphill almost the entire game. You look at Klay — he was magnificent tonight. ... That guy right there, Henry? He's walking on air," a Comcast SportsNet analyst said.

"If it wasn't for Klay Thompson, the Warriors wouldn't be in this situation. They were down and out, but Klay Thompson took this game to another level," another said.

While the Warriors were the favorites heading into the series, going down 3-1 put their backs against the wall. Only nine teams in NBA playoff history have comeback from a 3-1 deficit to win a series.

But this is the same team that went 73-9 in the regular season, so if anyone can do it, you'd think the Warriors would be at the top of the list.

Still, they'll have their work cut out for them. The Thunder's Kevin Durant and Russell Westbrook have shown that once they get going, it's tough to stop them. They're averaging 28 points a piece or more per game this series.

Saturday's win forces a Game 7 back in Oakland where the Warriors went 39-2 in the regular season. Game 7 tips off at 9 p.m. EST on Monday.