Warriors Nab US Capitol Invite Instead Of A White House One 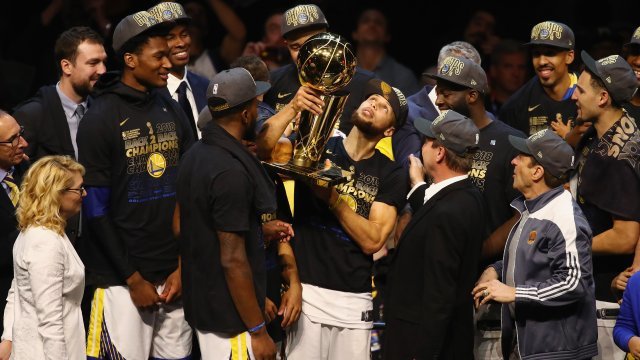 To no one's surprise, the Golden State Warriors won't be visiting the White House. So now they're invited to the U.S. Capitol instead.

With the NBA championship in hand, the Warriors got an invite from two California lawmakers — House Minority Leader Nancy Pelosi and Rep. Barbara Lee.

This is a familiar situation. Less than two weeks ago, a last-minute cancellation meant no White House visit for the Super Bowl champion Philadelphia Eagles. When that fell through, two Pennsylvania lawmakers invited the team to the Capitol instead.

That debacle prompted Steph Curry and LeBron James, star player for the Cleveland Cavaliers, to say their respective teams wouldn't visit the White House regardless of who won. President Donald Trump seemed unfazed by their preemptive RSVP.

This is the second year in a row Trump has snubbed the Warriors, who also won the championship in 2017. Last year, a Twitter spat between Trump and Curry prompted the president to withdraw the team's invitation.