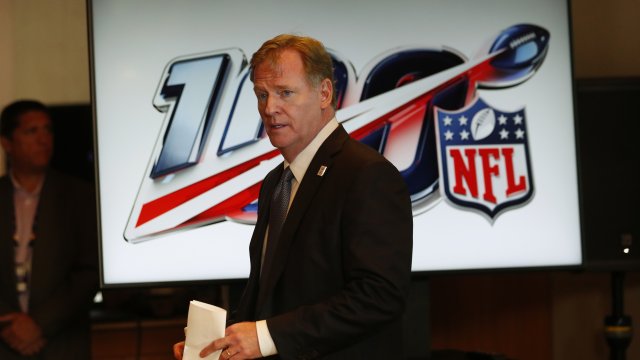 SMS
Managers Are Urging The NFL To Postpone The 2020 Draft
By Gage Jackson
By Gage Jackson
March 25, 2020
The draft is scheduled for April 23-25, but general managers are calling for it to be postponed following the closure of all league facilities.
SHOW TRANSCRIPT

The NFL is shutting down its facilities due to the coronavirus, and managers say the league needs to take at least one more major step: postponing the 2020 draft.

NFL Commissioner Roger Goodell announced Wednesday that all 32 teams' facilities will be closed until further notice. That worried the league's general managers subcommittee, which recommended that Goodell postpone the draft.

New Orleans Saints general manager Mickey Loomis said on "The Peter King Podcast": "I'd be personally in favor of delaying the draft so that we can get some of the work done that our scouts and our personnel people ordinarily do. The logistics of trying to conduct the draft with not having access to your draft rooms and your offices creates a lot of logistic problems."

According to ESPN, certain personnel will still be allowed in NFL facilities, including trainers, doctors and security. But managers are concerned there won't be enough time to conduct player physicals and other necessary procedures.

The draft is currently scheduled for April 23-25.