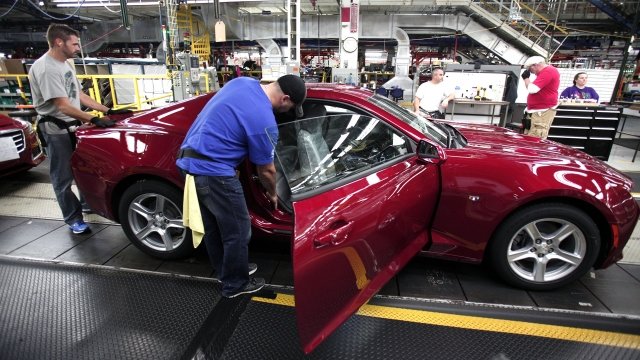 By Andrea Gonzales
December 14, 2018
The company announced Friday 2,700 of the 3,300 U.S. factory workers it planned to lay off can get jobs at other plants
SHOW TRANSCRIPT

General Motors had planned to lay off 14,000 of its employees worldwide, including 3,300 factory workers in the United States. On Friday, the company announced 2,700 of the 3,300 jobs could be saved by workers transferring to other plants. So far, 1,100 workers have volunteered to do so.

GM's CEO, Mary Barra, tweeted "Today, we have a plan for the majority of employees currently working at our impacted plants in Maryland, Michigan, Ohio and Oshawa, Canada that includes job opportunities at other GM facilities. We're committed to doing the right thing, for the future of GM and our people."

The company has been facing criticism since revealing in November it would close factories as part of a restructure to cut back on costs.

While the number of factory workers being laid off in the U.S. has decreased, the company still plans to lay off 2,600 of them in Canada. Eight thousand white-collar workers who work for GM will also be laid off.