GM Invests In Flint But Stays Quiet On Youngstown 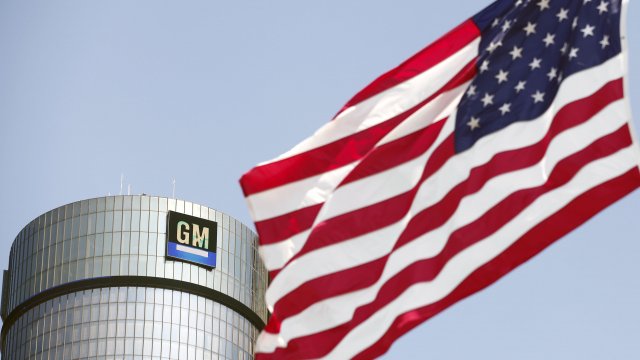 It's a feel-good moment for Flint with potentially major impact: $150 million of investment coming from General Motors.

"Can I say, BFD … what a big freaking deal this is for the city of Flint? For you to add $150 million, that’s a huge amount of money, and this is huge. And it shows your commitment to Flint," said Flint Mayor Karen Weaver.

But the excitement has been met with cautious optimism.

"It's a positive step. We've had a long period of disinvestment in Flint, a lot of those decisions made by GM. It's good to know we'll still have a strong GM presence," said Rep. Dan Kildee, who represents Flint's district in the U.S. House.

He says this particular investment won't necessarily lead to new jobs, but regardless he's glad to see the investment in his community.

"There's been a lot of doubt over the years that ultimately we would lose what we still have left. We've lost 90%of our manufacturing jobs. There was this fear that all the sudden it would go away. Seeing some investment is an indication that GM, at least for the time being, is here to stay," Kildee said.

GM has invested in other states like Indiana and Kentucky. But Ohio, the No. 2 auto manufacturer in the country, has seen little relief.

"Ford's still there. Chrysler's still there. Honda's building cars there. General Motors, through their mismanagement or whatever the reason, has pulled up plants in Mansfield and now Youngstown. It cripples the community," said Ohio Sen. Sherrod Brown.

The auto manufacturer has made some investments in places like Toledo and Defiance, but Brown says GM has abandoned loyal workers.

GM closed its Lordstown plant in March, ending 50 years of operation. It's part of 14,000 job cuts the company is making. The Detroit-Hamtramck plant is set to close early next year. A GM transmissions plant is also closing this year.

Still, Sen. Brown is looking forward, even as many of those workers leave Ohio, for Flint. Brown wants Ohio to get a piece of GM's new plans: he wants some part of the production of GM's 20 new electric vehicles it plans to produce by 2023. Brown says the company should be manufacturing them in Youngstown, where 5,000 workers have been laid off.

"That community has been great for the company, and GM owes us that," Brown said.

"The frustration is that plant has been productive forever. It's 53 years old, they've retooled it many times. It's as modern a GM plant as it is. Why wouldn't they, instead of moving jobs to Mexico, why wouldn't they come in and retool that plant?" he asked.

GM says it expects to bring more jobs back into the U.S. over time.

"You don't want to over-invest in places where the market is dwindling or has gone away. And that's some of the unallocated plants. Those are part of those decisions. So it's a tough thing," said GM President Mark Reuss.

But for now, it's Flint getting a new round of investment, while Youngstown is still reeling.