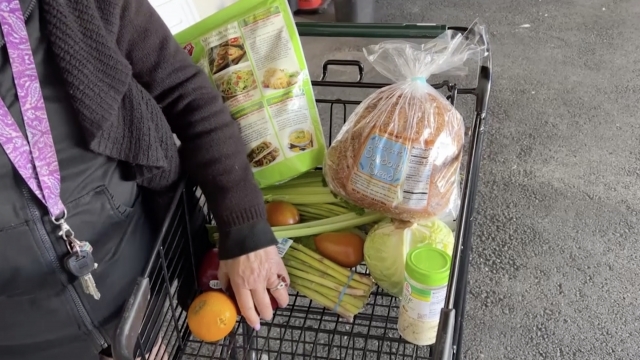 At a food bank near San Francisco, Mary Heimann stocks up. A weekly ritual to get the necessities and something that could soon get more difficult for her and millions more around the world.

"I come to the food bank every week," Heimann said. "They have fresh vegetables and stuff that I can't necessarily afford."

World leaders on economics and trade are warning that as the war in Ukraine rages on and key Chinese ports face closure amid renewed COVID restrictions, supply chains could once again be snarled.

"A potential food crisis is looming," World Trade Organization Director-General Dr. Ngozi Okonjo-Iweala said. "It's now clear that the double whammy of the pandemic and the war has disrupted supply chains, increased inflationary pressures and lowered expectations for output and trade growth."

In China, where aggressive COVID restrictions are forcibly isolating the sick from their neighbors and families in Shanghai, strict measures at the nearby port — a bastion of global trade — are stranding grains and metals at sea and stoking fears trans-Pacific trade to the U.S. will be derailed again. On top of it all – the war in Ukraine.

"The most immediate economic effect of the war has been a sharp spike in the prices of food, energy, fertilizer and some important minerals for which Ukraine and Russia are key suppliers to world markets," Okonjo-Iweala continued.

Sec. Janet Yellen saying monetary leaders convening in Washington next week will focus on how to stave off global starvation as war cuts off critical supplies from eastern Europe.

As even lesser concerns weigh heavily, analysts are worried about global recession.

"Particularly in Europe, which is most vulnerable, I worry more about recession prospects. But it should be ... It is likely to be a hit to global growth," Yellen continued.

Still, amid the chaos, trade is growing. And globally, COVID-19 surges have a comparatively smaller impact on international commerce, leaving some experts hopeful.

"We continue to expect trade to grow this coming year despite the fact that it will be much weaker than we thought. So, trade remains resilient. And I think that's important to realize," World Trade Organization Chief Economist Robert Koopman said.

Surely a boon to people like Heimann, who need the food to keep coming in.

"I feel like people now need to know that poor people depend on coming here like it's something we need every single week and that the food bank provides a great service," she said.