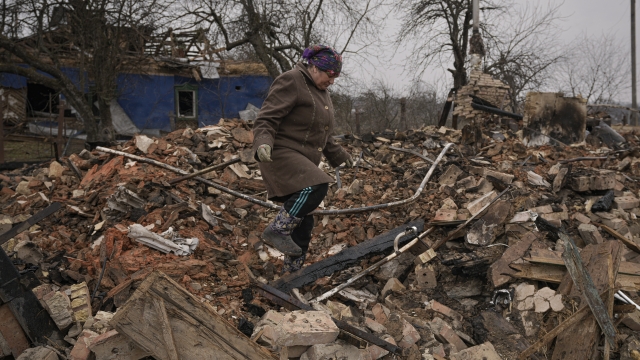 As Russian forces ramp up their brutal assault on Ukraine, international observers have noted at least three dozen instances of war crimes — air strikes on a theater with children inside, troops opening fire on a bread line, attacks on apartment buildings, even an attack on a children's hospital.

The Associated Press has independently documented at least 34 attacks on civilian areas by Russian forces in Ukraine. All backed with witness accounts and time-stamped photos and videos.

The World Health Organization has tracked nearly twice as many — 64 attacks on Ukraine's health infrastructure alone since Russia's attack began.

"It is sad that we need to say that over and over again. Any attacks on health care are violations of international humanitarian law," U.N. Secretary General Spokesperson Stéphane Dujarric said.

The United Nations Human Rights Office has confirmed Russian attacks have killed at least 1,035 civilians, including dozens of children. More than 1,500 Ukrainians are wounded.

"Oh, I think he is a war criminal," the president said.

Both the U.S. and U.K. are now working with independent organizations to document evidence of Russia targeting civilians. And Amnesty International is documenting Russian war crimes in the besieged port city of Mariupol.

"The International Criminal Court will doubtless indict Vladimir Putin," Scheffer said. "This is a top-down aggressive war, so there's no question of his superior responsibility in waging this war."