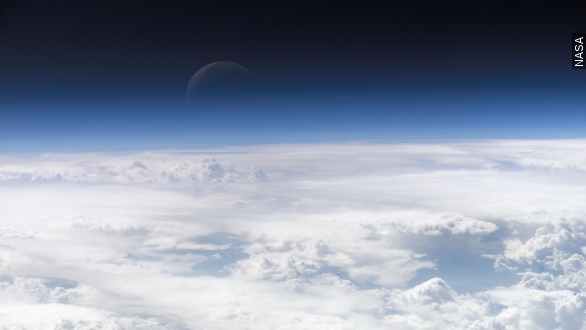 The National Oceanic and Atmospheric Administration reports CO2 levels have been on track to pass this milestone for years. Some of its research sites recorded 400ppm as early as 2012. (Video via NOAA)

“This marks the fact that humans burning fossil fuels have caused global carbon dioxide concentrations to rise more than 120 parts per million since pre-industrial times. Half of that rise has occurred since 1980.”

Researchers averaged samples from 40 sites around the globe, so variables such as population centers or active volcanoes wouldn’t skew the results.

NOAA expects the average will stay above 400ppm until May, after which blooming plants in the northern hemisphere should draw off some of the CO2 as fuel for photosynthesis. (Video via NOAA)

But it’s not a permanent reduction: climate scientists at NOAA say it will take a huge worldwide effort to reverse the effects of accumulated CO2.

Simply leveling off atmospheric carbon dioxide would require humans eliminate 80 percent of our worldwide fossil fuel emissions. It would take even more cutbacks to get CO2 concentrations to decline. (Video via NASA)

That’s a tall order, and only getting taller: numbers from the Energy Information Administration suggest global emissions could climb more than 40 percent as places such as India and China develop. (Video via NDTV)

The climate summit scheduled for later this year in Paris has its work cut out for it. The Guardian quotes a spokesperson with the U.N. group overseeing the talks, who says there “needs to be a long term development plan … for triggering a peaking of global emissions in 10 years’ time followed by a deep, decarbonisation of the global economy by the second half of the century.” (Video via United Nations)

The Paris summit will start in November.

This video includes images from NASA and NOAA.