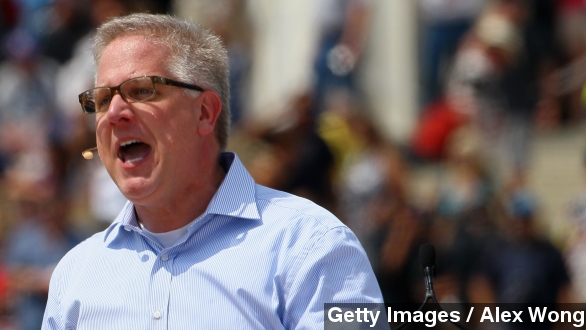 Conservative do-everything host Glenn Beck reveals he spent years hosting both radio and television shows, traveling the country giving speeches and generally riling people up, all while dealing with a debilitating illness Beck says made him think he was crazy.

GLENN BECK ON THEBLAZE: "This is me actually coming out of a surgery. ... It has baffled some of the best doctors in the world, it has frightened me and my family as we didn't know what was happening."

During his Monday night show on TheBlaze, Beck said his health issues included vocal cord paralysis, eyesight problems, episodes similar to seizures and even phantom pains that had him convinced pieces of broken glass were in his foot.

Beck says doctors at a Dallas-area brain center eventually diagnosed him with an autoimmune disorder and adrenal fatigue, among other things. He says he's been in therapy treatment for nearly a year. (Video via Carrick Brain Centers)

The health issues first popped up around five years ago as Beck says he was planning his "Restoring Honor" rally — a religious, revival-style set of speeches in Washington, D.C. (Video via YouTube / TheDailyBeck)

That time period was just after Fox News picked up Beck's talk show, and the already controversial host started a string of moves that got him as much attention as the issues he talked about.

GLENN BECK ON FOX NEWS: "This president, I think, has exposed himself as a guy over and over and over again who has a deep-seated hatred for white people or the white culture. I don't know what it is."

Beck later left Fox News in 2011. The president of Fox News said at the time the network wanted viewers focused on a single daily television show, elaborating, "His goals were different from our goals."

Beck went on to set up TheBlaze, his own network that's gone through multiple rebranding efforts since its launch.

The good news for Beck — he says he received a clean bill of health this summer and appears re-energized. He started working on a pilot show he briefly described and said, “We need to tell the stories of love and courage where the good guys win.”