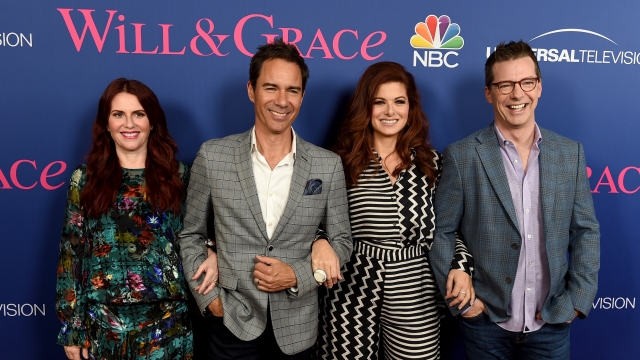 There are more LGBTQ characters on scripted television than ever, according to data released Thursday by the advocacy group GLAAD. The group's annual "Where Are We on TV" report found LGBTQ characters comprise 10.2% of all regular characters — the highest percentage since GLAAD started tracking.

GLAAD reports that of the 879 regular characters scheduled to appear on broadcast scripted prime-time TV, 90 are LGBTQ. The report also notes an increase in characters with disabilities and record-high representation of women. The racial diversity among LGBTQ characters on broadcast TV also jumped since last year.

According to the report, the majority of LGBTQ characters across broadcast, cable and streaming TV are still gay men. Lesbian and transgender representation, meanwhile, increased across both broadcast and cable but declined on streaming. And while GLAAD says bisexual-plus people make up the majority of the LGBTQ community, their representation across the three platforms fell from last year.

GLAAD emphasized the importance of representation in the report's recommendations. It said, "At a time when viewers have more options for entertainment than ever before, Hollywood must include lead LGBTQ characters whose stories are told with nuance and depth that reflect the real world that audiences know."

Megan Townsend, GLAAD's director of entertainment research and analysis, told Newsy the organization is calling on TV networks to ensure that 20% of series regular characters on prime-time TV are LGBTQ by 2025. She said the report underscores the impact LGBTQ characters can have on public discourse.

She said: "We do know kind of the power of representation and that what we see on our screens kind of shapes our perceptions of the world that we're in. So it's super important that what is on our screens reflects the audience who is consuming it and the culture that is taking all of that content in."