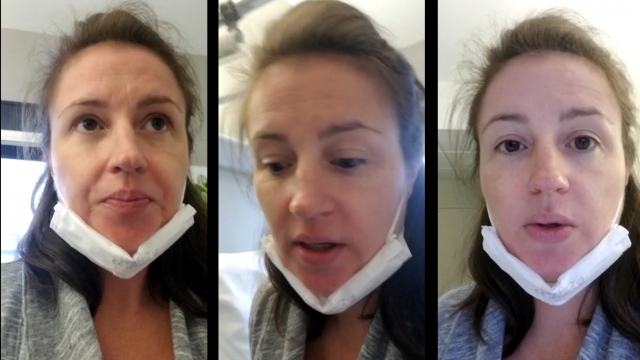 A woman shares her experience of laboring and giving birth amid the COVID-19 pandemic.

Shortly after global health officer Kelli Cappelier and her family moved to Dakar, Senegal, last fall, she discovered they were expecting their second child. They began to think about where they would like to deliver the baby and decided on France, where Cappelier's husband is from.

Cappelier had done her research and selected a hospital that was known for few interventions in birth and a holistic approach to childbirth, something that was important to her. After delivering her son via cesarean section, she was hoping to have a VBAC — a vaginal birth after cesarean.

But as they arrived in France on March 12, everything changed.

Within days, the French government closed its borders to nonessential travel and the country went into lockdown. While Cappelier, her husband and son were living near her husband's family, they couldn't visit.

Excited, she went to her first prenatal visit on March 17, and quickly discovered this was not the experience she had imagined. "Everything was very tense. And people don't really know how to interact with other people," she said. Her husband and son weren't allowed at her visits. "And I immediately was just like, oh, my God, what is going on here?"

On top of that, it was a foreign health care system, and she was communicating in French while wearing a mask.

Another big change: She would have to be alone for most of her labor. Partners were only allowed into the hospital for the delivery and a few hours after.

"I think I've just now come to terms with it. And at 40 weeks today," she said just a few days before going into labor. Still, she was worried about what that meant for her hopes of a natural childbirth. "The statistics are there, and if you don't have a partner at birth, your outcomes tend to be less favorable," she said.

On April 21, after experiencing contractions for a few days, Cappelier checked herself into the hospital while her husband waited in the car. She went to a room designated for labor, where she says she stayed for four hours, alone. "We're not meant to labor alone, you know? And when you have that much pain and you don't feel like you have an advocate, it was really hard."

By the time she had dilated to 4 cm, the hospital staff said she could call her husband to join her. But by then, she was exhausted and needed a break. "We finally got the epidural in, and I was like, 'I can breathe again.'"

She continued to labor, while wearing a mask, her husband by her side. Finally, she was close to needing to push, when there was a shift change. Her new doctor came in and gave her four or five chances before deciding to intervene. "Before I even knew it was happening, he'd already cut the episiotomy and was like forceps inside of me. And that was it."

The two of them spent the next three days in the hospital bonding and healing. But again, without her family there, it was not what she had hoped or planned for. "Missing out on that bonding experience as a family, not being able to do that in the first critical days is difficult," she said.

When I spoke with her over a week after the birth, she said she was at peace with the experience, but had a newfound passion for support during childbirth: "Because I work in public health, it was interesting to, like, live a statistic basically of, you know, that you should have assisted childbirth."