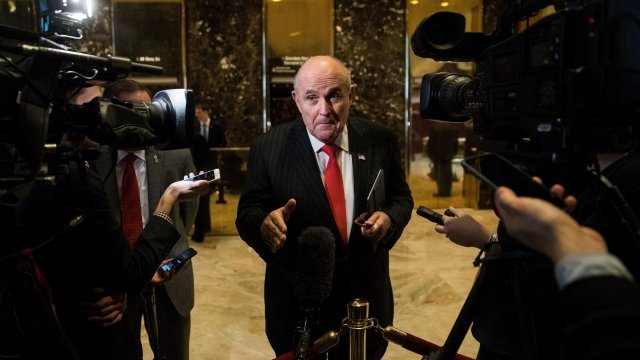 SMS
Giuliani Met With Mueller To Discuss Possible Trump Interview
By Katherine Biek
By Katherine Biek
April 26, 2018
During Robert Mueller's investigation, there's been some back-and-forth over whether or not the president would sit down for an interview.
SHOW TRANSCRIPT

Rudy Giuliani reportedly met with special counsel Robert Mueller earlier this week to restart negotiations for a possible interview with the president.

Over the course of Mueller's investigation, there's been some back-and-forth over whether or not President Donald Trump would sit down for an interview.

CBS News reported talks between the two teams stalled after the the FBI raided the office and home of Trump's personal attorney Michael Cohen earlier this month.

Since then, Giuliani, a former New York City mayor, joined Trump's legal team. It's reportedly his job to serve as a liaison between Trump's and Mueller's teams.

Unnamed sources familiar with the Tuesday meeting told The Washington Post it was pretty informal. When Giuliani reportedly said Trump is still opposed to a possible interview, sources say Mueller stressed that getting to question Trump would help with the obstruction of justice part of his probe.

Trump's repeatedly denied there was any collusion between Russia and his campaign.