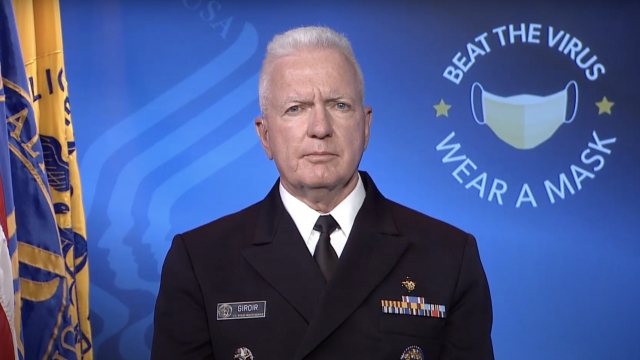 SMS
White House Official Tells Newsy Testing Priority Is On The Vulnerable
By Amber Strong
By Amber Strong
July 28, 2020
Members of the Coronavirus Task Force will appear before Congress this week to answer questions about the national testing strategy.
SHOW TRANSCRIPT

This week members of the Coronavirus Task Force will appear before Congress as members of the House ask the question on the minds of many Americans: What’s up with the testing delays? And is there a national plan in place?

“There is a national strategy we've been executing on for months,” said Adm. Brett Giroir, assistant secretary for health for the Department of Health and Human Services.

Almost six months into the pandemic, the administration is under fire about the delays in testing.

In an op-ed for CNBC, former White House acting chief of staff Mick Mulvaney wrote in order to fix the recession, we need to fix the "testing problem," calling the delays inexcusable.

“I think discussions like 'Everyone who wants can get it', is not where we are. We're in the middle of a historic pandemic,” said Giroir.

Giroir tells Newsy the focus right now is on the very ill and vulnerable.

“No. 1 is making sure that we can diagnose everyone in a hospital setting within 24 hours. And we're really doing that. That's very important, because, as opposed to March, we now have treatments. We now have remdesivir, we now have steroids,” he explained.

But for others, there’s a delay. On July 11, feeling ill and having vulnerable people in my home, Newsy's Amber Strong went to a drive-thru site for a COVID-19 test. As of July 28, still no results.

Giroir calls her case an outlier and stresses times are improving due to so-called pool testing.

"Labcorp has already announced even yesterday that they're expecting their turnaround times to be two to three days. So significantly improved,” he said.

A spokesperson for Quest Diagnostics, one of the largest commercial labs in the country, told Newsy Tuesday that while they’ve seen an increase in capacity due to pool testing, they haven’t seen an increase in turnaround times for molecular tests yet.

Results are available in about two days for priority patients and are anywhere from seven days to two weeks for everyone else.

They say the delays were partly due to a strain on supplies and demand from the Sunbelt states.

But a frustrated Colorado Gov. Jared Polis complains that the delays are defeating the purpose of the tests. Long waiting times for results make them, in his words, “almost useless from an epidemiological or even diagnostic perspective.”