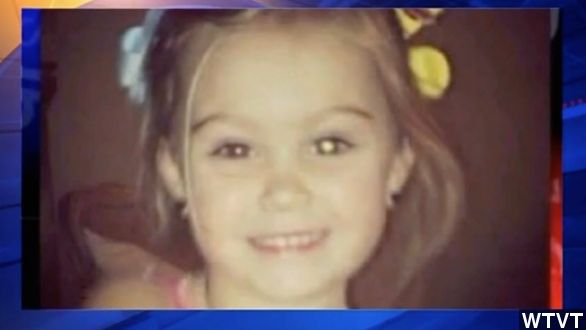 By Candice Aviles
April 3, 2014
A three-year-old was diagnosed with a rare eye disease after her mother posted a picture of her on Facebook.
SHOW TRANSCRIPT

Mothers everywhere put up or post cute pictures of their kids — that’s no surprise. But a picture posted by one mother on social media actually may have saved her daughter’s eyesight.

“A Tennessee three-year-old was diagnosed with a rare eye disease after her mother posted a picture of her on Facebook. Two of Tara Taylor’s friends urged her to get it checked because one eye appeared to be glowing.” (Via KTVN)

WREG reports one of her friends wrote, “Hey, I’m sure it’s nothing. It’s probably the lighting, but your daughter’s eye is glowing and you might want to have it checked out because it’s a sign there could be an issue with her eye.”

Taylor took her daughter, Rylee, to a doctor, and she was diagnosed with Coat’s disease, which is a condition that leads to vision loss or blindness. WTVT spoke with a doctor who explains Rylee’s case in depth.

“In her particular case it was a vascular problem that affected the retina but it can also be a tumor. In this case it was a tumor if you see the child right here. The right eye.”

According to the Coats Disease Foundation, if the condition is found early on there is a chance of saving some level of vision.

WREG reports Rylee is getting treatment every few months and is still able to see. Taylor said Rylee has never experienced problems with her vision before but is very grateful for her friends who noticed.