Gina Belafonte: We Need to Reclaim Narratives of Marginalized Peoples 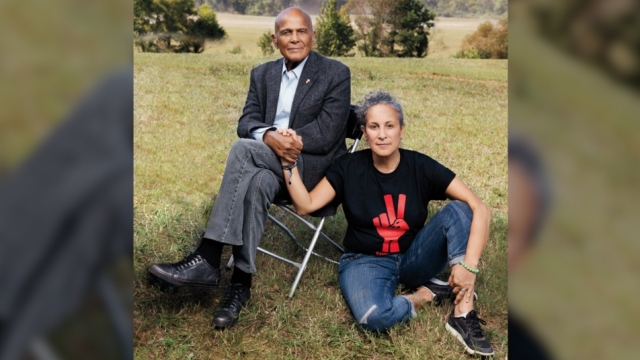 Harry Belafonte is the "King of Calypso." Finding a home in art but also activism, he has used his platform to elevate the voices of the disenfranchised.

The world has witnessed his contributions to the civil rights movement — The creation of the hit charity single "We Are The World" and the anti-apartheid movement to name a few.

These are contributions his daughter, Gina Belafonte, says have become a family legacy that she is adding to.

"My grandmother told my father, 'If you haven't done something in your day to combat injustice or to face it and call it out head on, then you have wasted your time that day,'" Gina said. "So in the legacy of my grandmother and my father, and that kind of commitment and intention, I just have forever been in both service and continue that work today."

Gina spent a decade focused on prison abolition and gang intervention. She later became the executive director of Sankofa, which is a social justice non-profit she founded with her father.

The word sankofa is Ghanaian. It translates into this philosophy: "You must reach back to reclaim that which is lost in order to move forward."

So it was poetic when surrounded by birds — the symbol that represents sankofa — Gina walked Newsy through her efforts to reignite the activist tradition.

"We began to reach out to artists to see if they would be interested in having a conversation, to see how we could — as a collective — come together and begin to raise awareness around the issues of mass incarceration, around the issues of immigration, around the issues of income disparity and poverty because we were seeing how poverty is consistently criminalized. And then, we took on the overall banner of violence because we also knew if we wanted to have a real community and network of artists, some people were going to be into eco-violence, food deserts, climate change, domestic violence, war," Gina added.

"So, we wanted to have a broad enough space where artists could come and they could really, without filter, express their frustration and to help work out and strategize with them how they could begin to connect themselves to the things that they were passionate about but didn't know how to do it without alienating their fan base," Gina continued.

Take Usher, he turned to Sankofa for support with connecting his music directly to social justice action.

The non-profit's efforts also extend beyond celebrity. One of its latest projects uses virtual reality technology to help incarcerated men and women in California facilities work through any traumas or triggers before returning to their communities.

"We really want to use art as a tool to help educate folks on what's happening in their communities and it's just been a really amazing opportunity for us, and it's our 10th anniversary right now," Gina said. "I'm really excited about the work that we're doing. My father also is turning 95 and it's just a wonderful celebration for us this year ... And Sankofa is primed and ready to continue that legacy."