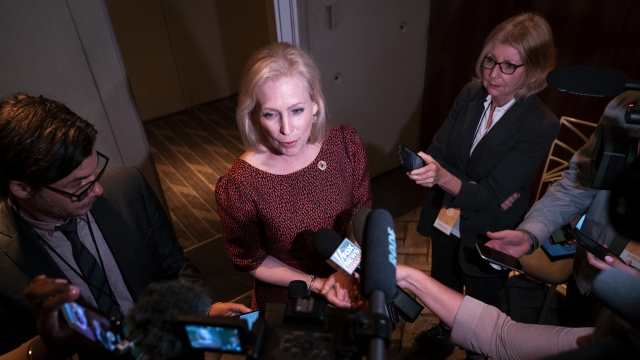 "Remember after the shooting in Las Vegas, he said, 'Yeah, yeah, we're going to ban the bump stocks.' Did he ban the bump stocks? No, because the NRA came crashing down and said, 'Don't you dare do any restrictions on our guns around this country,'" Gillibrand said.

But there's a big problem with that critique: The senator is just plain wrong.

Bump stocks became a key point of contention after the Las Vegas shooting in October 2017. The gunman had a dozen weapons outfitted with the accessory that effectively turns a semiautomatic gun into a fully automatic one.

In the immediate aftermath of the shooting, President Trump did say he would look into a ban on bump stocks. Two months later, his administration started the formal process to review regulations surrounding the devices. By December 2018, the rule became final, creating a new nationwide ban on bump stocks.

That rule is currently facing legal challenges, but the ban is in effect while those lawsuits make their way through the court system.

Our partners at Politifact reached out to Sen. Gillibrand's team, who acknowledged that President Trump did indeed ban bump stocks. But her office seemed to defend her Fox News statement, pointing to the time that passed between the Las Vegas shooting and the ban going into effect.

But that rationale doesn't make Gillibrand's false statement correct. She said President Trump didn't ban bump stocks, but he did.