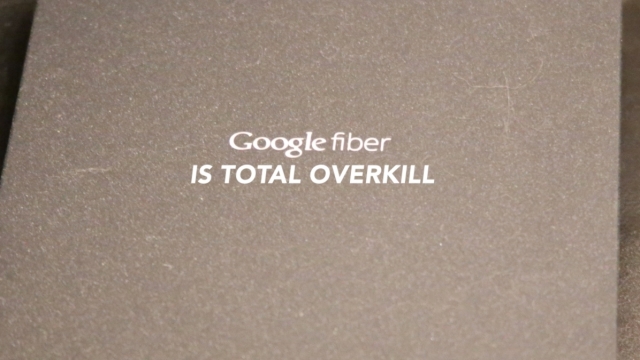 If you live in the right place, Google will sell you a gigabit internet connection — fast enough to download a gigabyte of data in eight seconds.

But fiber connections like these are almost total overkill with today's internet. Think about what you do with your home internet: watch Newsy, watch Netflix, browse Facebook, watch Newsy some more, maybe download games from Steam. Maybe you even do all of those at once.

According to the FCC, you're doing it all with about 30 megabits per second, on average. And broadband executives and even U.S. lawmakers point out — kind of rightly — that there's no huge demand for anything faster yet. There's a good chance your router can't even take full advantage of a gigabit connection.

SEE MORE: Your Favorite Browser Might Be Taking A Chunk Out Of Your Battery Life

But proponents are hopeful that new uses for these speedy new connections will spring up. Telemedicine is a frequent example: Fiber could be a cheap way to bring the data-heavy practice of remote health care to more people and to rural locations.

And we shouldn't forget that Ultra HD elephant in the room: video. According to Sandvine, streaming audio and video are already 65 percent of all traffic on North American computers. The last time it measured, Netflix alone was basically a third of the internet. Cisco forecasts video traffic will almost triple by 2020 and expects total bandwidth will climb along with it.

You can help that along, if you want. If you're lucky enough to have a gigabit line right now and have some kind of superhuman ability to split your attention, you could watch 40 Blu-ray-quality Netflix streams, all at the same time. Like we said: overkill.