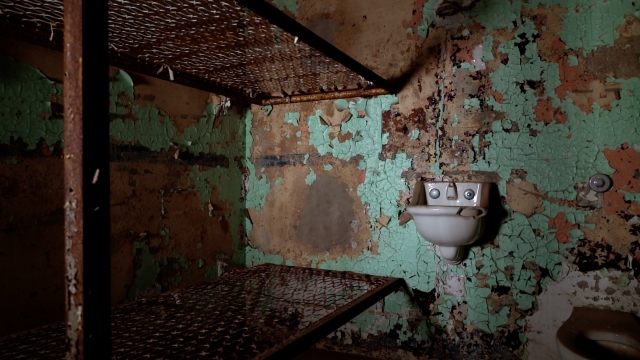 Once a prison for the living, the Ohio State Reformatory in Mansfield is believed to be haunted by its former occupants — thousands of convicted felons. Now it's a spiritual lockup, where no soul is getting out.

Many consider this one of the spookiest abandoned buildings in the U.S. And there are wild claims about this piece of Neo-Gothic architecture — sounds of chains dropping on the floor, sinister growls, unexplained footsteps, tormented voices and sudden church bells. However, no one seems to be able to explain the spectral happenings.

"There were a number of deaths here on the premises," Hallie Statham-Kitzler said of the reformatory. "This was a place of a lot of violence and a lot of suffering. ... This was not a happy place."

This closed prison is active with paranormal activity.

"I had never seen an apparition or shadow person before," said paranormal investigator Greg Feketik, "until one night sitting right here."

Feketik says the former prison is one of the eeriest places to be.

FEKETIK: "As I'm sitting here, I see a shadow figure come up the stairs, take a right, walk down the hallway."

AXEL TURCIOS: "What did you do at that point?

Visitors have claimed they have experienced the incomprehensible.

FEKETIK: "As I'm contemplating what I saw, I heard growling coming from the other room. I'm like, 'That wasn't good.' But shortly after that I heard church bells." The former prison was built between 1886 and 1910 and designed with medieval influences to look like a fortress so no one could escape.

More than 150,000 inmates passed through the gates of the Ohio State Reformatory in its 94 years as a state prison.

HALLIE STATHAM-KITZLER: "Men were incarcerated here that had terrible pasts and that had a terrible time here. There was a lot of violence in the cell blocks."

If this ghostly stomping ground looks familiar, you've probably seen it before — in the movies. It was the set for "Air Force One" and, most notably, "The Shawshank Redemption." In reality, it was originally meant for inmates with first-time nonviolent offenses.

STATHAM-KITZLER: "You hadn't completely messed up your life. There was still hope for you to go on to live a law-abiding life outside the reformatory."

But that changed in 1930, when one of the worst prison disasters in American history took place. A fire at the Ohio State Penitentiary in Columbus killed 320 inmates.

FEKETIK: "They had to find other prisons within the Ohio prison system."

The paranormal investigator adds that some of the surviving inmates were transferred to the reformatory building.

FEKETIK: "These inmates coming here from the Ohio penitentiary were the worst of the worst. They were rapists, murderers, your lifers, your felons. This is where they housed them."

More than 200 people died in this complex, and many people believe the souls of the dead still haunt the prison corridors.

TURCIOS: "Is this the most haunted place in America?"

STATHAM-KITZLER: "In my opinion? Yeah."

STATHAM-KITZLER: "If it's not the most, it's up there for sure. Honestly, as I was sitting waiting when you guys were out there filming, there were footsteps going up the stairs to the central guard rooms."

There are claims that detail disembodied moaning, balls of light and phantom smells.

FEKETIK: "Can you smell it?"

The smell of a campfire was vivid as we walked to the attic.

FEKETIK: "This place is really a violent area. And this is one of the places where you do want to treat them with respect. ... I believe that that smell that we smell is from the inmates who came from the Ohio Penitentiary. You know how your clothes smell after sitting around a campfire? If they're coming from the fire, if their clothes are all smoky, and they still have those clothes with them ... I believe that that's what that is."

This is where the most paranormal activities have been recorded. After checking the video footage we shot, we found this strange image — small balls of light moving around in one of our video clips.

TURCIOS: "That was a noise, right?"

FEKETIK: "We'll hear a lot of noise up here. So, you hear it sounds like movement."

Many of the inmates who were in this former prison had tragic deaths. Many of them died because of illnesses, some of them were murdered, and some of them driven to insanity. There's at least one report of an inmate who lit himself on fire. And that's a common belief among paranormal investigators: Men who once suffered in life, now have their souls stuck here serving for all eternity.