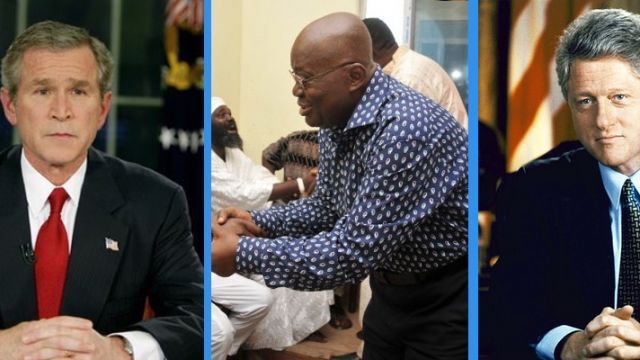 Ghana's presidency changed hands over the weekend in a peaceful ceremony that went off without a hitch — for the most part.

But during his inauguration speech, President Nana Akufo-Addo said some lines that sounded a bit familiar.

That's exactly what President George W. Bush said during his 2001 inauguration speech: "I ask you to be citizens: citizens, not spectators; citizens, not subjects."

Ghana Shuts Down A Fake US Embassy That Issued Real Visas

The fake embassy had been operating for a decade in Ghana's capital city.

Akufo-Addo also told the nation, "Ghanaians have ever been a restless, questing, hopeful people."

That sounds very similar to a line delivered by President Bill Clinton during his 1993 inauguration: "Americans have ever been a restless, questing, hopeful people."

The new president's communications director later apologized for the "complete oversight," saying it was an accident that the borrowed lines were not attributed to their original authors.

Communications Director Eugene Arhin went on to add, "It is insightful to note that in the same speech were quotes from J.B. Danquah, Dr. K.A. Busia, Dr. Kwame Nkrumah and the Bible, which were all duly attributed and acknowledged."

Akufo-Addo is a former human rights lawyer and has run for president twice before. He was elected on his promise to provide free high school education and establish one factory in each of Ghana's districts.