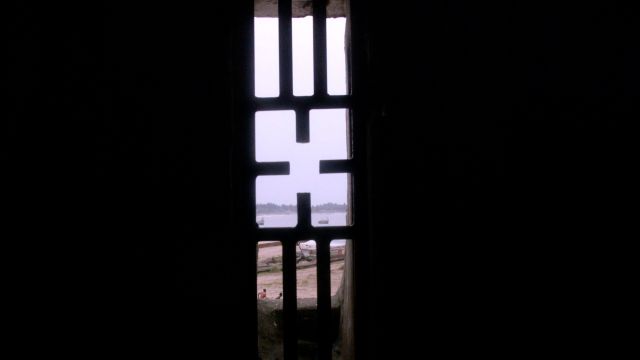 SMS
Before The Boat: Life In An African Slave Castle
By Jamal Andress
By Jamal Andress
February 8, 2017
The horror stories from inside this Ghanaian slave castle easily rival the cruelty of the Middle Passage and life on an American plantation.
SHOW TRANSCRIPT

The cruelty of the slave trade didn't begin when displaced Africans stepped onto plantations, nor when they began their journey across the Middle Passage. It started at Elmina Castle.

This castle on the coast of southern Ghana is one of the oldest slave castles in the world. Millions of Africans were held there for three months at a time before being shipped across the world in chains.

"About 150 women were here, and at that time there were no toilet facilities for them. This is the original floor," a tour guide told Newsy.

"Initially, the trade was butter," the guide said. "When they shifted to slave trade, the same rooms were converted to dungeons."

One of the first things visitors notice when they enter is the smell — you can still smell menstruation, likely because the original floor is still intact.

The castle housed Portuguese soldiers, missionaries and merchants. But all were overseen by a "governor," who regularly picked female slaves from the courtyard to bring to his room.

For those female slaves who rebelled against the governor, punishment came in the form of public humiliation.

Sometimes, the slaves revolted. When that happened, female slaves were punished by having a cannon ball chained to their leg. The punishment was meant "to serve as a deterrent to other female slaves," the guide said.

For the men, the punishment was permanent. 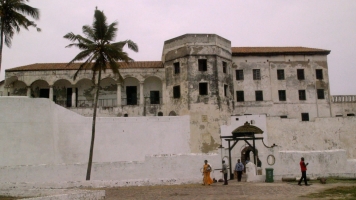 A Hidden Treasure In This Ghanaian Slave Castle: An Overdue Apology

"This is a dead cell for the male slaves," the guide said, standing in a room marked with a skull and crossbone. "Those who were rebellious or tried to escape fighting the masters, they were brought here — no food, no water, until you die."

Men and women were kept separate throughout their stay. Husbands didn't see their wives. Mothers couldn't see their sons. But they were reunited very briefly at the door of no return.

Millions of souls passed through that door on their way to the Caribbean, Europe and America.

This seaside castle was used for captivity for more than 300 years, holding 1,000 slaves at a time and then shipping them out every three months. It's just one of nearly 40 castles along the Ghanaian coast, which makes it impossible to count the number of lives lived in chains.