Ghana And Oil: How Africa's 'Rising Star' Has Faded 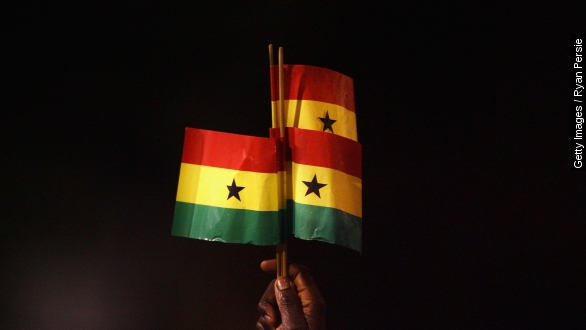 Discovering oil can be a big economic boost for countries, but in Ghana, it's been kind of a mixed bag. (Video via University of Wyoming, Google)

Among other things, it's raised the stakes of a border dispute at sea between Ghana and the neighboring Ivory Coast. (Video via Ghana Broadcasting Corporation)

On Saturday, an international tribunal announced while Ghana wouldn't be allowed to carry out further oil exploration in the contested area, it would be allowed to continue producing oil there. And for Ghana, that's an important win. (Video via Tullow Oil)

That's because the country has seen an economic downturn over the past couple of years, somewhat sobering expectations for what had been hailed as "Africa's rising star." (Video via PBS)

Ghana earned those plaudits through years of continued political stability, largely avoiding the civil wars and internal conflicts some of its West African neighbors have seen over the past two decades. (Video via Youtube / ustelevisionnetwork)

So when oil was discovered there in 2007, it raised interest from investors abroad and expectations from people within the country. (Video via CNBC)

As Foreign Policy writes, the average Ghanaian overestimated the wealth oil would bring:

"Because voters would interpret any fall in living standards as mismanagement of the oil revenues, the government felt compelled to maintain and even expand expenditures."

A burgeoning middle class started spending more on imports, adding to already increasing inflation, which led the country to ask for help from the International Monetary Fund in August. (Video via CCTV)

Optimism also fueled plans for major development projects in the country's capital, Accra, perhaps none more symbolic than the Hope City project. Originally envisioned as a major tech hub, Al Jazeera reports construction on the project hasn't started, even though the ground-breaking ceremony was more than two years ago. (Video via E.tv Ghana)

The World Bank projects Ghana's economic growth in 2015 to total just 4.5 percent, down from 8.8 percent in 2012. The IMF approved a $918 million bailout for the country earlier this month.