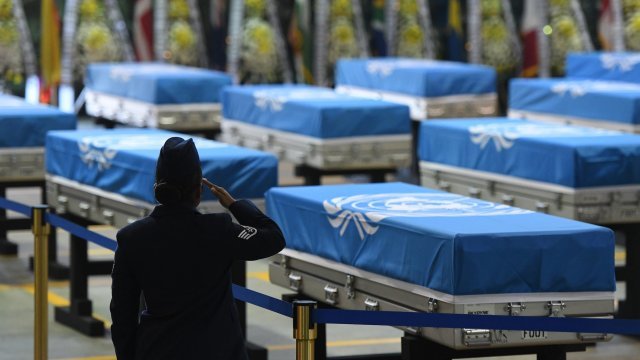 SMS
The US Has A Complicated History Of Getting Remains From North Korea
By Jake Godin
By Jake Godin
August 1, 2018
The U.S. has been trying to get its war dead from North Korean soil since the Korean War ended in 1953, and it still has a ways to go.
SHOW TRANSCRIPT

North Korea has returned the remains of 55 American soldiers killed there more than 60 years ago — the latest sign of thawing relations between the two countries. But it's also a drop in the bucket compared to how many fallen U.S. soldiers are still in North Korea.

The remains are from the Korean War, a brutal three-year conflict that went on from 1950 to 1953 and drew the borders of modern-day North and South Korea. During the war, the U.S. intervened to help the South repel North Korea's invasion.

The Pentagon estimates there are around 7,700 remains that are unaccounted for from the war. Of those, the vast majority are north of the Military Demarcation Line that separates North and South Korea.

The remains are mainly concentrated in places where major battles took place and at POW camps. At least 1,000 are believed to be within the heavily fortified Korean Demilitarized Zone and nearby buffer zones. 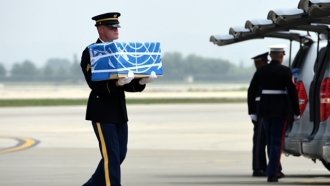 So Far, So Good For Trump's North Korea Diplomacy

Attempts to recover the fallen initially began in 1953 after an armistice was signed to end the war. As part of the agreement, North Korea had to hand over all soldier remains. More than 3,000 were initially recovered in 1954 in what the U.S. military called "Operation Glory."

After that, exchanges were sporadic. A total of 208 caskets were exhumed and returned by North Korea between 1990 and 1994. Between 1996 and 2005, more than 220 sets of remains were brought back by joint North Korean-American recovery teams.

But then recovery efforts ground to a halt in 2005 after President George W. Bush's administration said it was too dangerous to continue working in North Korea.

With this most recent return, some Pentagon officials believe U.S. recovery teams could be back in North Korea searching for remains by next spring.

Whether that'll actually happen or not is still up in the air. Relations between the U.S. and North Korea would have to continue to improve — otherwise, it may be a long time before any more remains are repatriated.