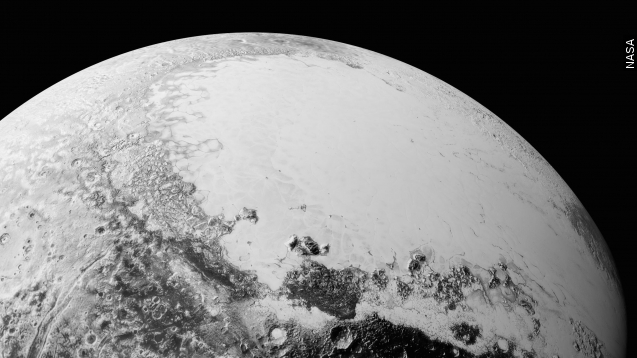 SMS
Get To Know Pluto As New Photos Come In Over The Next Year
By Steven Sparkman
By Steven Sparkman
September 10, 2015
NASA's New Horizons spacecraft has started the slow process of beaming back high-resolution photos of Pluto.
SHOW TRANSCRIPT

NASA's New Horizons spacecraft has left Pluto far behind, but it's only just started sending photos back to Earth. (Video via NASA)

Over Labor Day weekend, New Horizons started transmitting high-resolution photos of Pluto for us all to gawk at. A lot of them are things we'd seen before, but with more detail. And to think, these were the best pictures we had just five years ago. (Video via NASA, NASA / ESA)

To the untrained eye, the new photos are just really pretty to look at. But, of course, astronomers are all over them, saying some complicated things and some ... less complicated things. Let's see what they're homing in on.

For now, they're mainly just pointing to the incredible variation in the types of terrain Pluto has. This part looks a lot like the kind of ice floes we might see on Earth, and NASA's report pointed to this area, which looks like it has dunes.

That would be weird, because dunes imply wind, and Pluto doesn't have enough of an atmosphere for that — at least not anymore. One of the project leads said, "Either Pluto had a thicker atmosphere in the past, or some process we haven’t figured out is at work. It’s a head-scratcher."

You can check out the photos on NASA's website, and you might as well bookmark it. New ones will be coming in regularly for the next year.