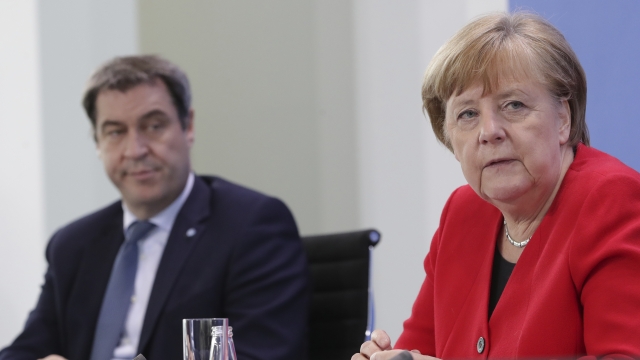 Under the plan, Germany's 16 federal states will take on more responsibility and ultimately decide when to further loosen restrictions.

Shops will be allowed to reopen with additional hygiene measures in place, and schools will gradually reopen in the summer term. Schools for older children have already started reopening.

Nursing homes and facilities for the disabled will also be open for visits. In addition, people from different households will be allowed to meet in public, but social distancing of about 5 feet will remain in place until June 5. People will also have to cover their faces in public.

Merkel also said the country's biggest soccer league can resume its season "from the second half of May."

The chancellor said: "I think we can safely state that the very first phase of the pandemic is behind us. But we need to be very much aware we are still in the early phases and we'll be in it for the long haul."

The announcement was made not long after hundreds of angry protesters held a rally violating distancing restrictions in Berlin on May Day, a public holiday similar to Labor Day.

Germany has seen fewer than 7,500 coronavirus deaths, according to the latest data from Johns Hopkins University. That's significantly fewer than other Western European countries, like Spain and Italy.

However, Germany isn't in the clear yet. If new infections rise to more than 50 per 100,000 people in a district over a seven-day period, state authorities will have to reimpose restrictions.