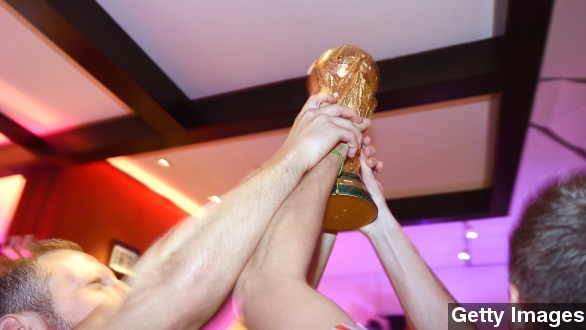 By Adam Falk
July 21, 2014
During the German national team's post-World Cup party, someone damaged the trophy. But no one is saying who did it.
SHOW TRANSCRIPT

Someone on the German national team deserves at least a yellow card. (Via Getty Images)

The President of the German football federation confirmed Monday, the world cup trophy was damaged during Klose and company’s raucous celebrations. (Via ESPN)

A small piece of the golden trophy reportedly chipped off. ESPN translated the president’s quote to German paper Die Welt. He said, "But do not worry! We have specialists on the case who can fix it.” (Via Getty Images)

USA Today reports the real trophy "contains more than six kilograms of 18-karat gold, is valued at more than $10 million" making it quite the target for thieves.

A few members of English club Chelsea’s staff were suspended after a replica of the Champions League trophy was damaged in 2012. (Via The Telegraph)

So question is, who’s to blame this time around? Well, FIFA says only winners of the tournament and heads of state can touch the trophy. (Via Getty Images)

If you're wondering, Rihanna is neither of those. She posted several tweets of herself with the trophy at Germany's after party. (Via (Via Twitter / @Rihanna)

Looks like Miroslav Klose brought the trophy to Chancellor Angela Merkel, but she’s not holding it. (Via Instagram / @miroslav_klose)

Or, well, I don’t like the way Kevin Grosskreutz is holding that trophy. Yikes (Via ​Getty Images)

The official word from Germany is, “We have investigated persistently who it was that damaged the trophy, but the investigation was concluded without a result." (Via Getty Images)

But let's not be too hard on Germany's team. Dropping or damaging an expensive trophy has happened quite a few times before.

Bayern Munich’s manager was caught letting the the German league’s trophy slip from his beer-soaked hands back in May. (Via Twitter / @CheGiaevara)

And that was before the party even got started. (Via Daily Mail)

But it’s not just the Germans. In 2011, Real Madrid player Sergio Ramos famously dropped the Copa del Rey trophy beneath the his club’s bus during a celebration. (Via Sky News)

What’s the deal? Don’t these guys know how to use their hands. Oh. (Via Getty Images)

Maybe next time we should give the trophy to this guy. (Via Getty Images)