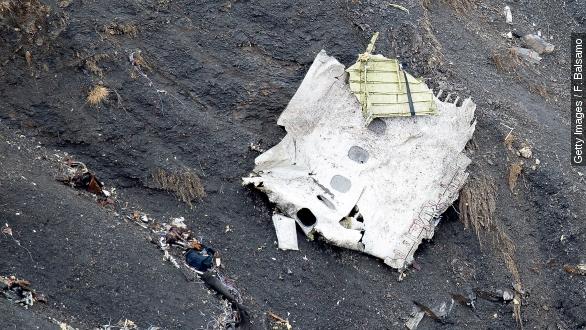 New details have emerged about the Germanwings airliner that crashed into the French Alps on Tuesday.

According to The New York Times, a senior military official says evidence from a black box voice recorder shows that "one pilot left the cockpit before the plane’s descent and was unable to get back in."

The official says that pilot kept banging on the door but no one answered. "You can hear he is trying to smash the door down. ... We don’t know yet the reason why one of the guys went out. But what is sure is that at the very end of the flight, the other pilot is alone and does not open the door."

There are still many unanswered questions, such as whether the crash was intentional or accidental. But, as CNN points out, the new report doesn't seem to lean to either direction.

"No, it doesn't necessarily. It could mean two things. One: nefarious; the pilot on the inside wanted to bring down the plane. Or, two: he had a heart attack or something happened to him and he was unable to open the door."

The cockpit audio is just one piece of evidence recorded by the Germanwings flight's black box. Investigators are continuing to study the rest of the data in an attempt to discover the cause of the crash.

Germanwings and its parent company Lufthansa report there were 144 passengers and six crew members aboard the flight, which was on its way from Barcelona, Spain to Dusseldorf, Germany.