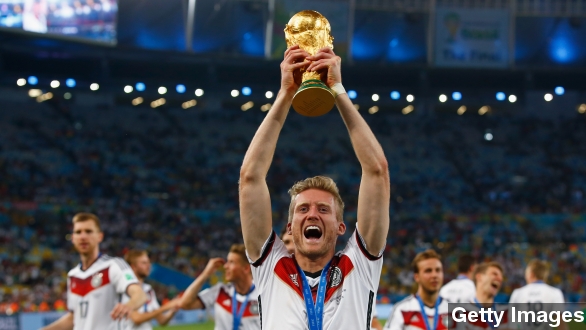 After a long, hard-fought battle, Germany is taking home it's fourth World Cup. (Via Getty Images)

It took nearly 113 minutes for the stalemate to break open, but it was the foot and chest of German striker Mario Götze that broke the hearts of Argentineans everywhere and led Germany to victory. (Via Getty Images)

Götze scored off a cross in the 113th minute to give Germany the 1-0 win over Argentina for the 2014 World Cup. (Via Getty Images)

It's the first time Germany has taken the Cup since 1990, when the West German team won with, once again, a 1-0 victory over Argentina. (Via Getty Images)

Both teams had good chances in the first half — Argentina with a goal flagged for offsides and Germany with a header ringing off the post and out. (Via Getty Images)

After that, there were a few more scoring chances for each side, a hard foul here and there, a streaker, and that's about it until Gotze's goal. (Via Getty Images)

The late goal didn't give Argentina much time to respond. A last minute free kick by Argentina superstar Lionel Messi went soaring high over the goal. (Via Getty Images)

Shortly after, soccer fans from all over the world erupted.

Many German outlets focused their praise on striker Götze, the 22-year-old who subbed in late in the match. (Via Abendzeitung, B.Z., Emsdettener-Volkszeitung)

Though the Argentina outlets were a bit more somber.

And Urgente24 reads, "The dream is over."

Germany will have four years to celebrate and will look to defend their title in the 2018 World Cup in Russia. (Via Getty Images)