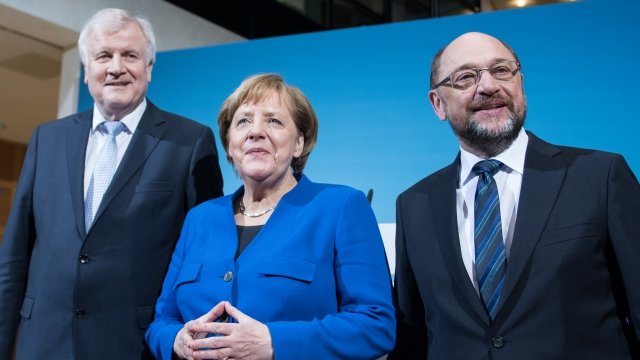 After roughly 24 hours of marathon negotiations, Germany's main political parties emerged with the beginnings of a coalition deal. If the deal goes through, it would end a monthslong political stalemate.

But the new government wouldn't look a whole lot different from the old one.

That's because Chancellor Angela Merkel's party — the center-right Christian Democratic Union — and the Christian Social Union party of Bavaria were in a coalition with the center-left Social Democratic Party for the past four years. Those parties were the only ones to lose seats in September's elections.

Before a coalition can be formed, Social Democratic Party members must approve it. If they don't, the country may be forced to vote again in snap elections — not a favorable choice for establishment parties since it could give rise to fringe groups.

NPR reports that in defense of the deal, Social Democratic leader Martin Schulz said, "At a time when [German] society is drifting apart, we wanted to hold the society together." 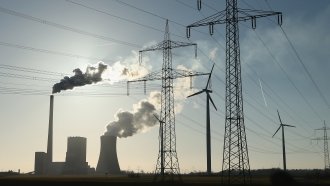 Why Germany Sometimes Has To Pay People To Use Power

Schulz had campaigned to become the main opposition to Merkel, but the rise of the far-right party Alternative for Germany might have changed that. The young party gained the third-most seats in September's vote, tapping into anti-immigrant and anti-Islam sentiments following the influx of more than a million migrants since 2015. It was the first time members of a far-right party were elected to the Bundestag since the National Socialist German Workers' Party, commonly called the Nazis.

Social Democratic members will vote on the coalition deal Jan. 21.