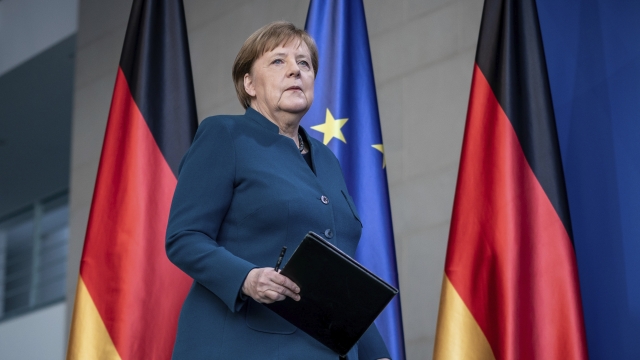 By Katherine Biek
April 3, 2020
Her spokesman said the leader returned to work at her Berlin office on Friday after she "tested negative for the coronavirus several times."
SHOW TRANSCRIPT

Her spokesman said the leader returned to work at her Berlin office on Friday, after she "tested negative for the coronavirus several times."

Merkel went into self-isolation on March 22 after a doctor that gave her a precautionary vaccination against pneumococcal infection tested positive for COVID-19.

Merkel continued to work from home during that time and conducted meetings via video link. She'll continue to use that method of communication now that she's out of quarantine.

In an effort to stop the spread of the coronavirus, Germany's implemented what it calls a "contact ban." Under it, gatherings of more than two people are banned — with exceptions made for families and people who live together. Schools and non-essential businesses are shut down and residents are asked to stay roughly 5 feet apart when out in public.

According to Johns Hopkins University, Germany has the fourth-highest number of coronavirus cases in the world behind the U.S., Spain and Italy.