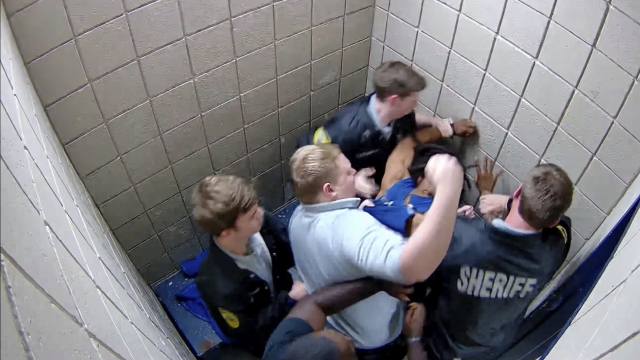 The local District Attorney called for the Georgia Bureau of Investigation to look into the incident.

A video showing a Georgia man being beaten by five officers in a jail cell has captured the nation’s attention.

Jarrett Hobbs was being held at the Camden County Jail in early September for drug possession and traffic violation charges.

According to police, he was pounding on his cell door, and cursing at officers, but what happened next his attorneys call inexcusable.

Hobbs leans down to pick up what appears to be a sandwich from his bed.

Then five officers enter Hobbs' cell and the video shows them punching, kicking and kneeing Hobbs. He's then dragged out of his cell and the beating continues for several more seconds.

Researchers say discussing the role of guns in America is crucial to conversations about police brutality and racial inequality.

Attorneys representing the 41-year-old Hobbs spoke outside of the Camden County Jail Wednesday, calling for the officers involved to be fired, arrested, and criminally charged.

Newsy also heard from other people from the county who claim they have sustained injuries at the hands of officers at Camden County Jail.

The local District Attorney called for the Georgia Bureau of Investigation, or GBI, to look into the incident.

The GBI will pass along its findings to the DA Keith Higgins and Higgins will have a final say on state criminal charges.

The ssherriff's office that employs the officers involved also says it is carrying out an investigation.

After Hobbs was assaulted in his cell by officers, Hobbs was charged with battery and assault in the incident. Hobbs is still behind bars.