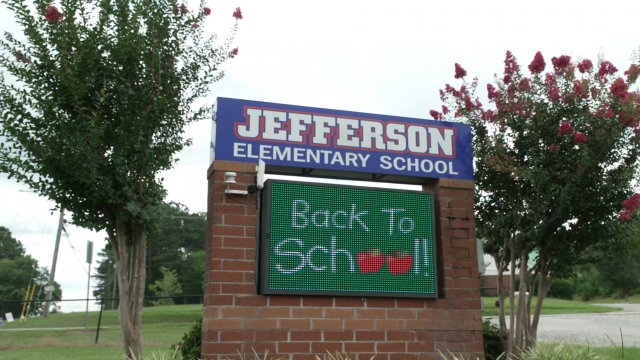 As a new school year begins, Jefferson, Georgia, is a city divided.

“If we don't wear the mask or social distance, people can die. So inconvenience, dying. It’s a no-brainer, in my opinion."

“We don’t believe someone should tell us we have to wear a mask.”

“If it’s saving people's lives, you know, why not?”

Newsy traveled to Jefferson, about an hour northeast of Atlanta, where public school buildings are open.

As a growing number of schools nationwide have opted to begin this academic year online, Jefferson City Schools are among the first in the nation to bring students back into the classroom amid the coronavirus. Confirmed cases in the area have been steadily increasing.

The school’s new guidelines call for deep cleaning, social distancing as much as possible, and encouraging its roughly 3,700 students to wear masks, including one the district will provide.

But face coverings won’t be mandatory, and that doesn’t sit well with senior Hope Terhune.

“I am OK with the fact that we are going back to school in person," she said. "I just wish that we were taking all the correct safety precautions.”

Or Rylee Meadows, who says she’s concerned about other members of their school community who might be high-risk.

“If it's strongly recommended, then masks don't work if not everyone wears one, because it doesn't keep a healthy person from getting sick," she said. "It just helps you not spread it to other people. So the students that won't be wearing masks will still be harming us, even if we decide to wear masks.”

The friends and classmates started an online petition to see how many others share their concerns. It has more than 1,300 signatures so far.

Masks have become a divisive issue for Jefferson’s 10,000 residents. Similar to other places across the country, not everyone there is supporting a mask mandate, including business owner Les Crane.

“The polarization is very harmful, not only the town but to the state and to the country," he said. "It's just, it's not good for our country at all. We've got to learn to understand that everybody's going to have a different opinion about things. We're going to have to learn to agree to disagree at times.”

“I hate seeing what I've been seeing on Facebook and what's happening to towns like us or states and all across America, just with whether you believe to wear a mask or not," said Cindy Crane. "It's just, it's sad. It's really sad, so I hate seeing this.”

A petition opposing masks has more than 230 signatures and several comments, including one calling masks “irrelevant,” another saying, “Only liberals can get rona and I’m not a liberal,” and one simply stating, “Cause I just ain’t doing it.”

In a statement to Newsy, Jefferson City Schools Superintendent Donna McMullan reiterated the district's stance and said in part, “As system and school leaders, we have consulted with multiple local and state health officials and medical professionals to make decisions regarding our mitigation strategies.”

The district will also offer a digital option for students who would rather learn online.