George R.R. Martin Has Another HBO Series In The Works 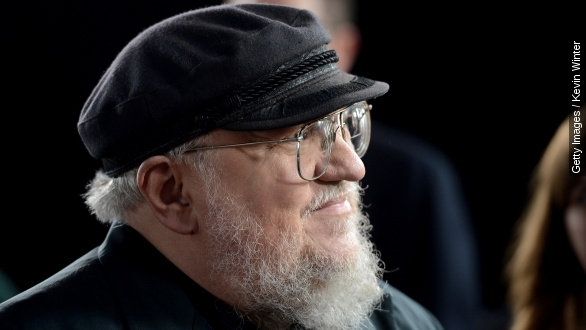 SMS
George R.R. Martin Has Another HBO Series In The Works
By Ben Lawson
By Ben Lawson
April 3, 2015
According to Entertainment Weekly, the writer behind the "Game of Thrones" phenomenon is working on a new HBO show called "Captain Cosmos."
SHOW TRANSCRIPT

You might have missed it Friday but it turns out that George R.R. Martin has another series in the works at HBO.

Martin is best known as a fantasy writer. His "A Song of Ice and Fire" series spawned HBO's incredibly popular "Game of Thrones." But his new project sounds a lot more grounded.

The news buried in an Entertainment Weekly story. The outlet revealed the show, called "Captain Cosmos," will follow a sci-fi writer telling unique stories at the dawn of the television age.

Before Martin's book readers get too angry, you should know the project reportedly won't be a huge time commitment.

The author catches a nearly endless amount of flack from his readers for the increasingly long gaps between his books. He began his "A Song of Ice and Fire" series nearly twenty years ago and still has two more installments to go before it is completed. (Video via TBS / "Conan")

So it seems like Martin is still trying to dedicate as much time as possible to finishing his next book, "The Winds of Winter." With that being said, you have to wonder if "Captain Cosmos" can really be called a George R.R. Martin project.

Michael Cassut of SyFy's "Z Nation" is already on board to write the pilot episode. It's looking like Martin will serve in some kind of overseer role and won't do much writing.

So maybe HBO is just trying to get the "from the mind of George R.R. Martin" tagline to go on "Captain Cosmos."

Even if this won't be a huge time commitment, Martin still has a lot on his plate. In addition to other projects, Martin has an overall deal with HBO and at least two other television concepts in development.