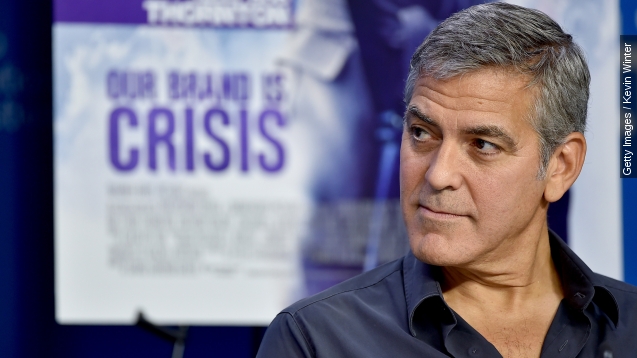 Only 12 percent of 2014's top-grossing films starred female protagonist. George Clooney — and many female actors before him — want to change this.

George Clooney has an answer to sexism in Hollywood. Rewrite male roles so they can be played by women.

That's how Sandra Bullock ended up as the lead in "Our Brand Is Crisis." Clooney, a co-producer on the film, said it was stuck in development until Bullock read the script and asked for the part.

Bullock's character was actually loosely based on political consultant James Carville. In the film, Bullock plays an American political strategist who gets involved in a Bolivian presidential campaign.

Clooney's casting decision seemed to have worked out, though. It's scoring some decent reviews with many critics agreeing Bullock was on point in the film.

But it's interesting that Clooney's comments about roles for women are getting so much attention when there have been so many women in Hollywood lately speaking up for gender equality in show business. (Video via Toronto International Film Festival)

"There's no equal rights amendment. We're [expletive]. ... I'm tired of the billboard where she is barely in her underwear and they are selling a watch," Helen Hunt said to The Huffington Post.

"They need to know you're pretty enough to put you on the cover of a magazine and I said well then I don't want it then," Gina Rodriguez told The Hollywood Reporter.

Amy Schumer has been very vocal about women's treatment in the media and frequently plays on stereotypes with her comedy.

And "Our Brand Is Crisis" isn't even the only film headed to theaters this fall with a female lead role originally written for a man.

Julia Roberts is also taking the leading role in "Secret in Their Eyes." That movie is a reboot of an Argentinian thriller originally written for with a male protagonist. And the film's director, Billy Ray, told Entertainment Weekly Roberts asked for as little of the script to be rewritten as possible.

Emily Blunt has the lead role in "Sicario" as an FBI agent battling drug cartels in Mexico. While "Sicario" was originally written for a female lead, the filmmakers say they got heavy pressure early in development to make the lead a man.

Clooney definitely has a point here. Despite a few standouts, only 12 percent of the top-grossing films in 2014 starred female protagonists, according to the Center for the Study of Women in Television and Film.

But with so many female voices in the discussion, it's interesting to see Clooney's comments getting so much attention.

This video contains images from Getty Images and music from Birocratic / CC BY 3.0.