George Clooney Is Engaged (AKA The Apocalypse Is Here) 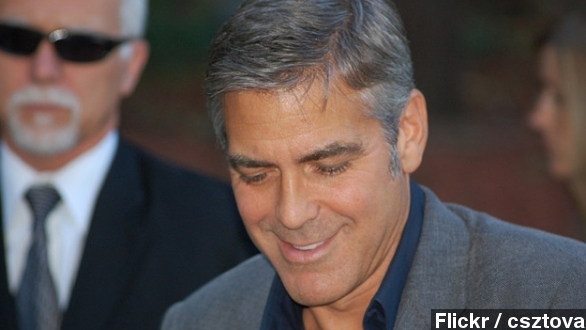 SMS
George Clooney Is Engaged (AKA The Apocalypse Is Here)

By Lauren Zima
April 26, 2014
People magazine says it's confirmed that George Clooney, the bachelor of bachelors, is gettin' hitched. Our minds are officially blown.
SHOW TRANSCRIPT

This just might be the first time in our lives we use the phrase, "never thought I'd see the day." According to People Magazine, George Clooney is engaged.

The outlet says it's confirmed through an unnamed source that Clooney put a ring on the finger of Amal Alamuddin, a human rights lawyer who was first reported to be his girlfriend just five months ago. (Via HLN)

People's source says, "George and Amal are trying to keep things very low-key but they also aren't really trying to hide this. ... They plan on being together forever."

Thirty-six-year-old Alamuddin was apparently spotted out to dinner with Clooney Thursday, and had a ring on that all-important finger. If this is true it's such a 180 for Clooney, we don't even know where to start.

Since then, he's been Clooney. Clooney who said he wasn't very good at marriage — that he had given it a shot. (Via CNN)

Clooney — dubbed the "eternal bachelor." (Via The Atlantic)

Clooney, whose own sister said he would never marry again... (Via Daily Mail)

And Clooney, who split with Elisabetta Canalis just weeks after she talked about wanting to get married in an interview. (Via The Huffington Post)

So, yeah, it's pretty mind boggling. How this woman changed the 52-year-old's long-made-up mind is unclear. Some reports note that Alamuddin is not in the entertainment industry, arguing that could be key.

Clooney's last serious girlfriend, Stacey Keibler — who just got married and is now pregnant — is a TV personality. (Via Us Weekly)

So far, no comment from Clooney himself, and his rep says he doesn't comment on his client's personal life. So, maybe Keibler's newfound stability sparked something in the actor's head, maybe he's just finally found the one, or maybe the world is ending. We'll keep you posted... if we're still here.