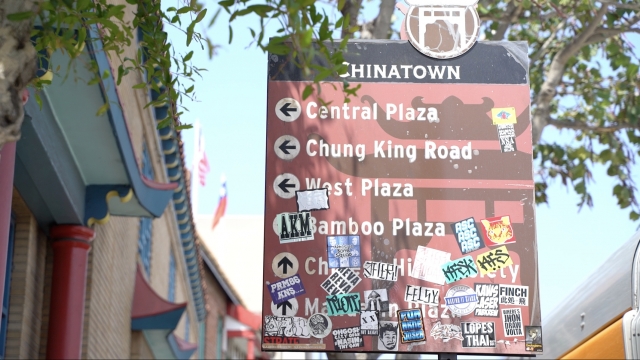 Deep in the heart of Los Angeles' Little Tokyo neighborhood sits this gift shop, where the shelves are stocked with imported Japanese collectibles and housewares.

Changes in the neighborhood have forced Rafu Bussan Inc. to move locations several times, but it's one of the lucky ones.

"A lot of the businesses have closed -- the mom and pop ones. We're one of four left of legacy businesses in Little Tokyo," said Carol Tanita, the manager of Rafu Bussan.

The rapidly rising rent in Little Tokyo and nearby Chinatown are taking a toll on residents too.

Sissy Trinh: "Chinatown was really established not just as a place where it was convenient for Asian people, but it was also where people went and got jobs, where they went to temple and churches in the languages that they spoke most predominantly, and where they set up small businesses."

Once a safe haven for Asian Americans, neighborhoods like Chinatown and Little Tokyo have changed dramatically over the years. Sissy Trinh, the executive director of the Southeast Asian Community Alliance, says this kind of gentrification has resulted in the loss of necessary goods and services.

Trinh: "We've lost four grocery stores and two medical providers as a result of gentrification. … New developers come in and they refuse to renew leases. … And these are businesses that have been paying market rate rents, but they don't bring a certain atmosphere that implies high-end business."

The Asian American and Pacific Islander community has been especially impacted by gentrification. A 2016 study by the National Coalition for Asian Pacific American Community Development and Little Tokyo Service Center found that more than half of poor AAPI’s live in what are now the nation's hottest and most expensive markets.

Anjan Chaudhry, the director of community empowerment for the National Coalition for Asian Pacific American Community Development: "What we've seen is like more predatory harassment by landlords and developers who see this as an opportunity to really harass low-income Asian residents, other immigrants and people of color, really by having poor housing conditions or raising the cost of rent or doing other things like shutting off heat and hot water."

Anjan Chaudhry spearheaded an initiative called "Our Neighborhoods."Run by National CAPACD, it aims to empower Asian Americans and Pacific Islanders by giving them the tools needed to fight against displacement caused by gentrification.

Chaudhry: "For a lot of the low-income community members that are living in the neighborhood, affordability is a big issue."

That's because many AAPI households in neighborhoods like L.A.’s Chinatown or Little Tokyo make less than 30 percent of the area median income. As a result, they're sometimes considered to be too poor by the government to qualify for affordable housing.

Because of this, SEACA is working on policy changes that are aimed at rewriting rules for affordable housing and new development.

Trinh says SEACA wants these neighborhoods to evolve — but it believes any changes that stem from gentrification shouldn't come at the expense of residents.

Trinh: "Oftentimes when we talk about gentrification and development, it's always about like it brings new jobs. It brings new opportunities. … We've seen the exact opposite. We've lost jobs. We've lost opportunities. Rents have only skyrocketed. Homelessness has only increased. And so making sure that our folks get to benefit from new investment — I don't think that's unreasonable."