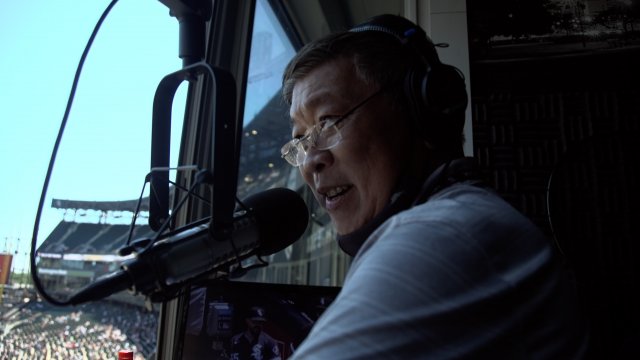 SMS
How Gene Honda Became An In-Demand Voice For Sports' Top Events
By Austin Kim
By Austin Kim
August 2, 2021
Gene Honda has built a reputation as arguably the busiest men in Chicago sports. He explains how he's been able to stay behind the mic for decades.
SHOW TRANSCRIPT

If baseball is a sign of summer, then Gene Honda’s voice is part of the soundtrack.

“Everyone wants a corner office. I get to work from home," Honda said while preparing for a game at Guaranteed Rate Field, where the White Sox play their games.

It's a booth he’s been able to call home for 32 seasons.  His secret? An easy-going attitude, meticulous preparation, and getting names right.

"I don't know if this is a function of being a minority or not, but you're sensitive to the proper pronunciation of names because of that," he said.

He’s a man in-demand across the country, making a career off early advice from his late father.

“His belief was that if you ever want to succeed in any business, you need to enhance your ability to speak in public," Honda recalled. "He meant take a speech class. Instead, his idiot son wandered into a radio station.”

Honda’s story’s been told before, giving people a chance to attach a face to the voice, which comes as a surprise for some, including the team staff when he was initially hired years ago.

“You came in the ballpark at street level, check in at security and walked up to the offices," Honda explained. "By the time I got up to the offices, security called up, 'You should see what the P.A. Announcer looks like!'And as I'm walking through, I'm seeing heads peering up over the cubicle. And luckily, I'm used to this, but I'm just giggling.”

Let’s face it there aren’t many people in baseball—behind the mic—who look like Gene Honda. His familiar voice, and longevity, make him a fan favorite—something the White So recognized with a mural unveiled this summer.

He hopes others break the mold and find their way in whatever they choose.

"It's representation across the board not just for one group. If you're qualified and you're good, you should have the job”

Honda has one more trick for staying in the job: focus. He likens his approach to a Broadway show.

"No one goes to 'Hamilton' five nights in a row. A lot of our fans don't come to our games five games in a row. They may be there one, two or three games this season. And you've got to treat it the same way as Hamilton. It's their one time to see you."

Fans will come to see the players first and foremost. But like any beloved, recurring performance, Honda will always be a fixture with the home team.