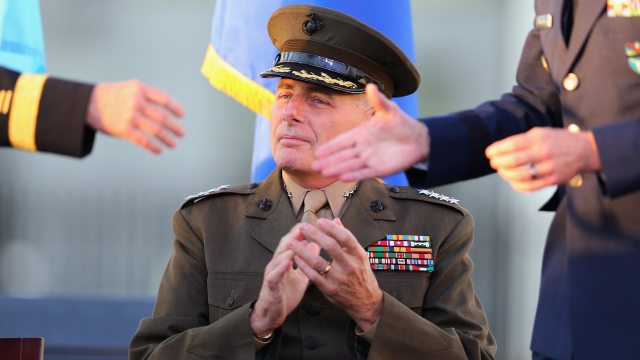 SMS
Trump Taps Gen. John Kelly To Head Department Of Homeland Security
By Briana Koeneman
By Briana Koeneman
December 12, 2016
Kelly was the head of the U.S. Southern Command, where he managed military operations in South and Central America.
SHOW TRANSCRIPT

Donald Trump has tapped retired Marine Gen. John F. Kelly to be the next secretary of the Department of Homeland Security.

Most recently, Kelly was the head of the U.S. Southern Command, where he managed military operations in South and Central America.

During his time in that post, Kelly clashed with the Obama administration over its plans to close Guantanamo Bay and its decision to open all jobs in combat units to women.

Prior to taking on that role, he served in multiple tours in Iraq and was a military aide to defense secretaries Robert Gates and Leon Panetta.

He officially retired from his extensive 45-year career with the Marine Corps in early 2016.

Kelly refused to endorse either presidential candidate during the election and said he would be willing to serve in a Democratic or Republican administration.

Kelly is the third general Trump has chosen for a high-level position in his administration, along with retired Gen. James Mattis as defense secretary and retired Lt. Gen. Michael Flynn as national security adviser.