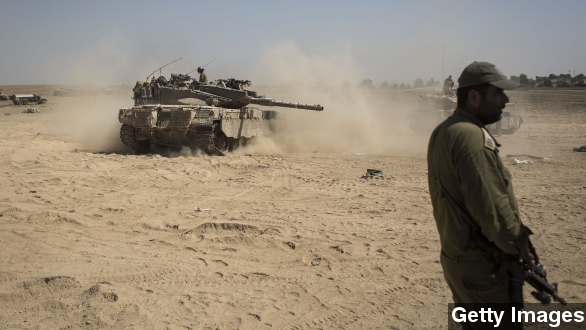 By Ben Lawson
July 28, 2014
A Gazan hospital was rocked by an explosion Monday that claimed the lives of 10 people, mostly children. Both sides point fingers at the other.
SHOW TRANSCRIPT

Explosions rocked a major hospital in Gaza Monday, killing at least 10 people, the majority of whom were children. (Via Getty Images)

The BBC reports five Israeli soldiers were also killed in the fighting Monday, four in a mortar strike along the border and one inside Gaza.

Much like the shelling that struck a United Nations school full of Palestinian refugees last week, neither Hamas nor Israel is accepting blame for the recent attack in Gaza. (Via NBC)

Today's attack occurred on the Muslim holiday Eid-al-Fitr, which marks the end of Ramadan. And that's why reports are surfacing that many children were out in the streets playing when the attacks rained down. (Via Euronews)

CNN spoke with several other eyewitnesses who claimed they heard a drone flying overhead immediately before the attack.

International calls for peace have fallen on deaf ears. Several short-term, humanitarian cease fires collapsed over the weekend. (Via The Telegraph)

"Israel is not obliged and is not going to let a terrorist organization determine when it is convenient to fire at our people." (Via Fox News)

Israel has previously said it would be in favor of a cease-fire as long as its forces were allowed to demolish underground tunnels that it says allows militants from Gaza into Israel. (Via Israel Defense Forces)

The Jerusalem Post writes that fighters from Gaza attempted to use one of those tunnels to cross into Israel Monday but they were met with Israeli opposition and at least one militant was killed.

Death tolls have steadily risen in the three-week long conflict. Among those killed: at least 50 Israelis and more than 1,000 Palestinians, many of whom were women and children.