Gay Marriage Allowed In Ala. Despite Top Judge's Order 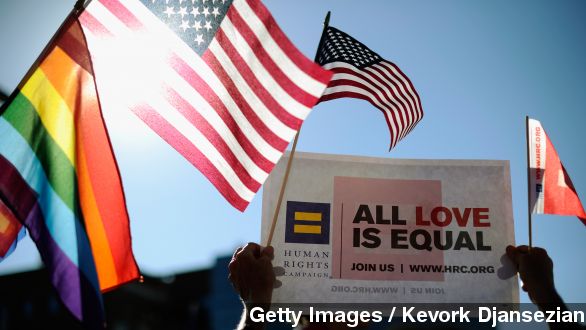 After an eleventh-hour attempt by the state's top judge to halt gay marriage, Alabama began issuing marriage licenses to gay and lesbian couples as planned on Monday.

"Same-sex couples in Alabama are saying 'I do' this morning," WBMA reported.

The U.S. Supreme Court voted 7-2 Monday, denying Alabama's request for a stay on a federal decision making gay marriage legal in the state. (Video via WBMA)

The previous ruling, which set Feb. 9 as the day marriages between same-sex couples would start in the state, had faced a challenge by Alabama Supreme Court Chief Justice Roy S. Moore. (Video via WVUA)

In an order to local judges Sunday, he wrote, "Effective immediately, no Probate Judge of the State of Alabama ... shall issue or recognize a marriage license that is inconsistent with [state law]." He added, "A marriage contracted between individuals of the same sex is invalid in this state."

Moore is perhaps best known for installing a Ten Commandments monument in Alabama's state judicial building — a move that got him removed as the state's chief justice in 2003 before being re-elected to the post in 2012.

As Time notes, Moore had previously written several letters and orders in opposition of gay marriage and had received backlash from legal scholars arguing he didn't have the authority to disregard a federal decision.

His efforts also drew some comparisons to former Alabama Gov. George Wallace, who in 1963 stood in the doorway of the University of Alabama in an attempt to block school integration in the state. (Video via Newseum)

The state had asked that the federal ruling legalizing gay marriage in the state be put on hold until the U.S. Supreme Court hears four similar gay marriage cases. The court is expected to rule on those cases this summer.