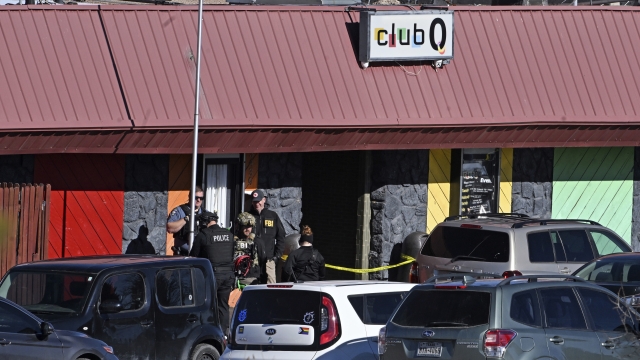 The law that allows guns to be removed from people deemed dangerous to themselves or others has seldom been used in Colorado.

A year and a half before he was arrested in the Colorado Springs gay nightclub shooting that left five people dead, Anderson Lee Aldrich allegedly threatened his mother with a homemade bomb, forcing neighbors in surrounding homes to evacuate while the bomb squad and crisis negotiators talked him into surrendering.

Yet despite that scare, there's no public record that prosecutors moved forward with felony kidnapping and menacing charges against the suspect, or that police or relatives tried to trigger Colorado's "red flag" law that would have allowed authorities to seize the weapons and ammo the man's mother says he had with him.

Gun control advocates say the alleged shooter's June 2021 threat is an example of a red flag law ignored, with potentially deadly consequences. While it's not clear the law could have prevented Saturday night's attack — such gun seizures can be in effect for as little as 14 days and be extended by a judge in six-month increments — they say it could have at least slowed the gunman and raised his profile with law enforcement.

The shooting at Club Q occurred as anti-gay rhetoric has intensified by extremists.

"We need heroes beforehand — parents, co-workers, friends who are seeing someone go down this path," said Colorado state Rep. Tom Sullivan, whose son was killed in the Aurora theater shooting and sponsored the state's red flag law passed in 2019. "This should have alerted them, put him on their radar."

But the law that allows guns to be removed from people deemed dangerous to themselves or others has seldom been used in the state, particularly in El Paso County, home to Colorado Springs, where the 22-year-old gunman allegedly went into Club Q with a long gun at just before midnight and opened fire before he was subdued by patrons.

An Associated Press analysis found Colorado has one of the lowest rates of red flag usage despite widespread gun ownership and several high-profile mass shootings.

Courts issued 151 gun surrender orders from when the law took effect in April 2019 through 2021, three surrender orders for every 100,000 adults in the state. That's a third of the ratio of orders issued for the 19 states and District of Columbia with surrender laws on their books.

El Paso County appears especially hostile to the law. It joined nearly 2,000 counties nationwide in declaring themselves "Second Amendment Sanctuaries" that protect the constitutional right to bear arms, passing a 2019 resolution that says the red flag law "infringes upon the inalienable rights of law-abiding citizens" by ordering police to "forcibly enter premises and seize a citizen's property with no evidence of a crime."

County Sheriff Bill Elder has said his office would wait for family members to ask a court for surrender orders and not petition for them on its own accord, unless there were "exigent circumstances" and "probable cause" of a crime.

El Paso County, with a population of 730,000, had 13 temporary firearm removals through the end of last year, four of which turned into longer ones of at least six months.

The county sheriff's office declined to answer what happened after the gunman's arrest last year, including whether anyone asked to have his weapons removed. The press release issued by the sheriff's office at the time said no explosives were found but did not mention anything about whether any weapons were recovered.

An online court records search did not turn up any formal charges filed against the shooter in last year's case. And in an update on a story on the bomb threat, The Gazette newspaper of Colorado Springs reported that prosecutors did not pursue any charges in the case and that records were sealed.

The Gazette also reported Sunday that it got a call from the shooter in August asking that it remove a story about the incident.

"There is absolutely nothing there, the case was dropped, and I'm asking you either remove or update the story," the gunman said in a voice message to an editor. "The entire case was dismissed."

A spokesperson for the district attorney's office, Howard Black, declined to comment on whether any charges were pursued. He said the shooting investigation will also include a study of the bomb threat.

"There will be no additional information released at this time," Black said. "These are still investigative questions."

AP's study of 19 states and the District of Columbia with red flag laws on their books found they have been used about 15,000 times since 2020, fewer than 10 times for every 100,000 adults in each state. Experts called that woefully low and hardly enough to make a dent in gun killings.

Just this year, authorities in Highland Park, Illinois, were criticized for not trying to take guns away from the 21-year-old accused of a Fourth of July parade shooting that left seven dead. Police had been alerted about him in 2019 after he threatened to "kill everyone" in his home.

Duke University sociologist Jeffrey Swanson, an expert in red flag laws, said the Colorado Springs case could be yet another missed warning sign.

"This seems like a no brainer, if the mom knew he had guns," he said. "If you removed firearms from the situation, you could have had a different ending to the story."