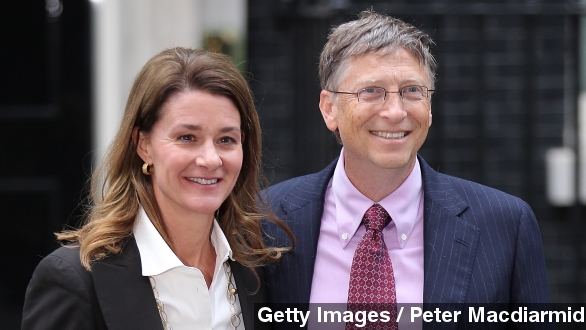 By Jay Strubberg
September 10, 2014
The Bill and Melinda Gates Foundation announced it would donate to a wide range of initiatives to fight the deadly Ebola outbreak in West Africa.
SHOW TRANSCRIPT

As world leaders continue to scramble to try and thwart the massive Ebola outbreak that continues to spread in West Africa, one of the wealthiest couples in the world is pumping up their contribution in a big way.

The Bill and Melinda Gates Foundation announced it will put up $50 million to support relief efforts in the beleaguered West African region to fight the deadly virus that has now killed almost 2,300 people. (Video via BBC)

The foundation held a Q&A session on Twitter Wednesday morning, laying out the specifics of the funding plan. It will take a broad approach, spreading the money across several kinds of aid.

In a press release, CEO Sue Desmond-Hellmann said the foundation is working with partners "to accelerate the development of treatments, vaccines and diagnostics that can help end this epidemic and prevent future outbreaks.” She also spoke with CNN.

"Our goal with this money is to gather with United Nations and U.S. agencies to put funds to use where it's needed the most, on the front lines. ... In addition, we want to support long-term diagnostics, vaccines and therapeutics."

The Gates Foundation had previously pledged $10 million toward various agencies, and this $50 million chunk will include that amount.

That aid went to the World Health Organization and the U.S. fund for UNICEF. The philanthropist group said it will also immediately send $2 million to the Centers For Disease Control and Prevention for treatment and to help strengthen the health care system. (Video via WABC)

This additional funding announced Wednesday, which is a little over half of what the U.S. government is proposing to send over, could make headway particularly with Ebola-fighting drugs.

A Forbes contributor says "lack of funding" is one of the main hurdles in getting them produced.

And, of course, the Gates Foundation isn't alone in its efforts to combat the outbreak.

Recently, the White House announced a $88 million funding plan though House GOP members may reduce the amount before it heads to a final vote. The U.S. is also adding to the already 1,400 aid workers in West Africa and the Pentagon announced a plan to build a 25-bed field hospital in Liberia for any aid workers who contract the deadly virus.